Dad Hagin made us aware that years ago Rev. John Wesley said, “It seems God is limited by our prayer life—that He can do nothing for humanity unless someone asks Him.” In the book of Genesis, we find that God gave dominion over the earth to Adam. Adam, through his disobedience, gave his authority to the devil. God cannot legally and justly move in and take away that dominion from the devil. The devil has dominion here. He has a right. He has Adam’s lease. This means God cannot do anything unless somebody on earth asks Him. 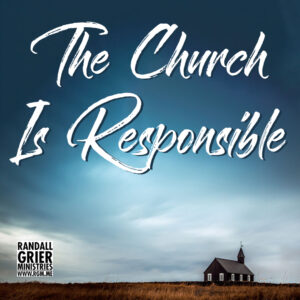 If this is true, and it is because it agrees with the Bible. Christians are responsible for praying and asking God to move in the earth. The Spirit of God will alert us, at times, what to pray about. If you are not sensitive to Him, you will not hear it in your spirit. There are many good things that don’t happen because we do not pray. There are many bad things that happen because we fail to pray. It is simply that simple. It is up to us according to the Bible.

Jesus wasn’t talking about binding a principality or a power up in God’s Heaven, because there is nothing in God’s realm that needs to be bound. No, Jesus was talking about the first heaven or the second heaven, because that’s where these evil powers are at work. Principalities and powers keep ruling in this realm on earth because they are able to operate through unbelievers or through ignorant and disobedient believers. However, believers can stop principalities, powers, and the rulers of the darkness of this world in their operations in Jesus’ name as they exercise their authority in Christ. Binding the devil in his operations against us is the scriptural way to deal with evil spirits ruling in the heavenlies.

Dad Hagin said, “I had two very similar and unusual spiritual experiences, one in 1970 and the other in 1979, that showed me how real our responsibility is to pray for our nation and for the world. In both visions I saw three huge, black, frog-like creatures coming up out of the Atlantic Ocean. They looked like huge frogs except they were much larger—about the size of whales.

You need to know how to interpret spiritual visions. Because these creatures came out of the ocean doesn’t mean they came up out of a literal ocean.

From Genesis to Revelation, “seas” or “waters” often symbolizes a multitude of people. In the first vision, I knew that the three frog-like creatures leaping across our country meant that three strategies of the devil would arise out of the multitude of peoples against our nation. The first strategy of Satan would be riots and disturbances. The second, would be political upheaval (Watergate, as it turned out). And the third, problems in the economic sector of our nation.

These evil strategies from the enemy don’t arise from the Christian population; they come from the masses of those walking in darkness because sinners are held bondage and dominated by the devil in the kingdom of darkness.

In the second vision in 1979, Jesus said to me, “If the Christians of this nation had done what I told them to do in My Word and had prayed for the leaders of their country, they could have kept those evil spirits you saw in 1970 from operating in this nation. None of those upheavals would have occurred in your nation. You would not have had the political, social, and economic disturbances in this nation, and the President never would have made the mistakes he made. In fact, I’m holding the Church responsible for the President’s mistakes.” When I heard Jesus say that, I cried out, “My God!” and began to weep. Jesus continued, “Yes, the Church is responsible before God Almighty.”

Jesus went on to say, “I know when you tell that to some Christians, they will laugh. But you wait until they stand before My Judgment Seat and see if they laugh when they are the ones who will receive the judgment.”

Jesus said, unless Christians pray, there will arise another time of riots and tumults and disturbances all across the nation, coming from different causes than the disturbances of the early 1970s.

The Church Is Responsible

Jesus Christ revealed the answer to the problems of our nation going on today, about fifty years ago. It seems the church fails to accept the responsibility for the evil in our nation. We do hear it is time for the Antichrist and the mark of the beast, and the end times are here so these things are supposed to happen. This places the blame on something else besides the church not praying. What we are experiencing now is not as bad as what our nation has been through. Our nation has had much evil.

According to what Jesus told Dad Hagin, in the vision, the church is going to be held accountable for this. We have not prayed and held back these evil spirits as we should. In fact, many in the church don’t believe there are demons, much less that they have authority over them. If you think upheaval is supposed to be happening like this in the world and our nation, why pray? You can’t stop it anyway. That is what the devil wants us to believe.

The end is not yet, even though it is on the horizon of time. Yes, the devil is stirred, but granny said the same britches he got mad in, he might as well get glad in. The church has total authority over every devil, demon and evil spirit.

There have been those who have had dreams and visions of destruction in the United States. I am not saying that what they have seen is not true. I am saying it can be averted and stopped if the church will pray. It can be held back by the church. I know the Lord said to me, “If the church does not turn to me, in prayer, during this virus, riots and civil disobedience, you have not seen anything like the devil has planned for this nation.” I knew the Lord was telling me all these things can be stopped by taking our authority in prayer. God Is With Us!