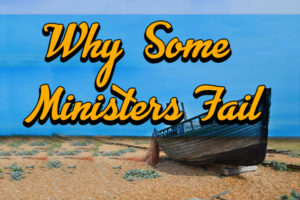 Samson was anointed by the Lord, but he was weak in character. Men and women are gifted or anointed to stand in certain offices of ministry. I witnessed ministers that could flow in the power of God, but died at a young age because they failed to be a good steward of the gift God gave them. You must reverence and respect the gifts and calling of God on your life if you’re going to live long enough to be successful.

In Acts 1, Jesus told his disciples to pray and wait for the power of God to be poured out. In Acts 2, the Holy Ghost was poured out with power that brought about signs and wonders. Peter preached under a powerful anointing and 3000 people were saved.

People started to get right with God because the Holy Ghost convince them they were not holy. The Holy Ghost comes into us to make us holy if we will yield to his correction. The outpouring of God’s power continued in Acts 3-5. It seemed like you could get away with living on the edge in Acts 1-4, but in Acts chapter 5 people started dying for telling lies! You must develop the character of God in your life. Along with God’s power comes God’s judgment.