The Holy Ghost spoke to me and said, “The power of God will take you places in ministry that your undeveloped character will not keep you.” The reasons ministers fail is because they major on the minors. If you major on the power of God, but fail to develop the character of God in your life, you will eventually fail. That has been proven out over the years as we have seen minister after minister fall because they failed to develop the character of God in their life. 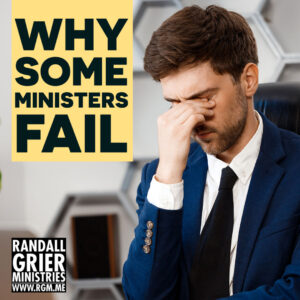 We live in such a time when the enemy is attacking Christians, especially ministers, that we have to develop the character of God or else.  Samson was anointed by the Lord, but he was weak in character. Men and women are gifted or anointed to stand in certain offices of ministry, but that gifting does not mean that their character is automatically increased. You have to develop it. I have witnessed ministers that could flow in the power of God, but died at a young age because they failed to be a good steward of the gift God gave them. You must reverence and respect the gifts and calling of God on your life if you’re going to live long enough to be successful.

In Acts 1, Jesus told his disciples to pray and wait for the power of God to be poured out. In Acts 2, the Holy Ghost was poured out with power that brought about signs and wonders. Peter preached under a powerful anointing and 3,000 people were saved.

People started to get right with God because the Holy Ghost convinced them they were not holy. The Holy Ghost comes into us to make us holy if we will yield to his correction. The outpouring of God‘s power continued in Acts 3 through 5. It seemed like you could get away with living on the edge in Acts chapter 1 to 4, but in Acts 5 people started dying for telling lies! You must develop the character of God in your life. Along with God’s power comes God‘s judgment.

Dad Hagin said that he had never seen anyone more anointed to pray for people with back problems and get results than Rev. Jack Coe. Not putting him down at all, but I say this so we can learn from him. Dad Hagin said he had never seen anyone more anointed and more miracles than in the ministry of Jack Coe. But Rev. Jack Coe died at 38 years old of some of the same things that he had been praying for and seeing people miraculously healed. This is why we need to steward the power of God that is in our life and have the character of God in our life and ministry.

Rev. Coe had gotten off in his life and the Lord told Dad Hagin to tell him to judge himself in three areas. I know many in the church world don’t believe in judgment, but God does. The Bible does. Dad Hagin didn’t get the opportunity to talk to him and he eventually died at 38 years old. The devil took him out because he would not judge himself. Judging yourself is part of the character of God. The power of God comes with the judgment of God and that’s why we must judge ourselves.

If you develop the character of God, you will have the power of God. Galatians 5 and 1 Corinthians 13 speak to us about love and the fruit of the spirit, which is really the character of God. Read these over and over and pray these scriptures over your life. I am praying that Christ be formed in you so that you can flow in God’s power and His character.