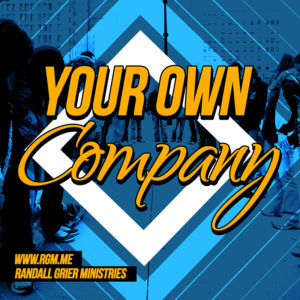 And being let go, they went to their own company, and reported all that the chief priests and elders had said unto them. – Acts 4:23

I’m going to make sure that I get the right wagon, and that I have my horse hitched to the right one. You do the same thing. If it’s supposed to be a working horse like a clydesdale then you can hook a big wagon with a load to it. Or you can hook a plow to it.  If it’s a race horse, you can’t hook up to a wagon that’s fully loaded or to heavy plows because that horse won’t make it very far. He’s not designed to do that. We’re not designed to do certain things. I’m not designed to do certain things. I can receive from a lot of different people and I do, and thank God for it.  However, there are certain things that I don’t follow real closely because if I do, I know what will happen. It will get me in error.

And being let go, they went to their own company, [Brother Hagin admonished us about that.  We all need a company.] and reported all that the chief priests and elders had said unto them. And when they heard that, they lifted up their voice to God with one accord, and said, Lord, thou art God, which hast made heaven, and earth, and the sea, and all that in them is: Who by the mouth of thy servant David hast said, Why did the heathen rage, and the people imagine vain things? The kings of the earth stood up, and the rulers were gathered together against the Lord, and against his Christ. For of a truth against thy holy child Jesus, whom thou hast anointed, both Herod, and Pontius Pilate, with the Gentiles, and the people of Israel, were gathered together, For to do whatsoever thy hand and thy counsel determined before to be done. And now, Lord, behold their threatenings: and grant unto thy servants, that with all boldness they may speak thy word, By stretching forth thine hand to heal; and that signs and wonders may be done by the name of thy holy child Jesus. And when they had prayed, the place was shaken where they were assembled together; and they were all filled with the Holy Ghost, and they spake the word of God with boldness.

The disciples went back to their company, the body of Christ, the church that they were hooked up with. This here is the whole company praying together. And after they got done praying, they were all filled with the Holy Ghost because they were in the right company.

It says that they were all, not just one of them, not just John and Peter, but they were all filled with the Holy Ghost. They, speaking of all, spoke the Word of God with what? Boldness!  The result of their company praying together: everybody was blessed. You know that not everybody was on the same spiritual level. You know that everybody didn’t understand the scriptures in the same way. There were probably some disagreements among beliefs, even in this company. Notice they weren’t fighting one another. They were standing with one another, praying with one another.

And what was the result? They were filled with the Holy Ghost. It’s important who you associate with. It’s important who you hook up with. Before you hook up or join up with this church or that church, this ministry or that ministry – make sure you’re being led by God to do so. When you do, when you follow the Holy Ghost, and join up where God wants you – that’s where the blessings of God are at. God is with you.