No one can deny that Jesus Christ had total mastery over everything when He lived here on the earth. The New Testament is filled with what we call miracles, signs and wonders – which He performed. The crowds of people were awe struck by Him because He spoke and acted with authority and worked miracles. 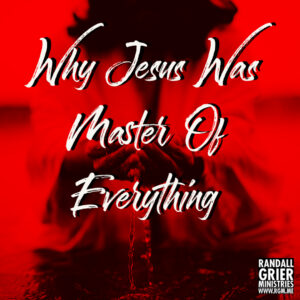 Jesus Christ never met a demon that He did not conquer. He never ministered to a sick person that He did not heal – if they believed. When He encountered weather from the environment that was destructive, He changed the weather. When He needed to go to a destination and water was in the way, He walked on top of it. When people tried to kill Him, before His mission was accomplished, He walked right through the angry mob without getting hurt. He made the great proclamation that no man would take His life, but rather He would lay it down and He did. He laid down His life for the sins of the human race and rose from the dead three days later. (John 10:18)

The reason Jesus Christ mastered the devil, sickness death and everything on the earth is because He first mastered Himself. He had total mastery over His spirit, soul and body. He was submitted to God in His mind, will, emotions and His physical body. Jesus said, “I only do what I see My father do and I only say what I hear My father say.” John 5:19, is the key note scripture for the life of Jesus Christ.

Jesus Christ knew how to live in the Spirit and not be affected by the physical world. He mastered the art of walking in the spirit. This means He was more aware of the spiritual realm than the physical world. He practiced this art and mastered it. You could say He lived the abnormal Christian life. His own family was concerned that He had lost His mind. Truly, what I am saying is not for the faint of heart or those who spend most of their time caught up in popular, physical world attractions. I believe a remnant will rise up and walk like Jesus walked and lived when He was on the earth. Jesus is coming back for a glorious church and people.

The Character Of God

The outpouring of the Spirit and Glory of God will require us to develop the character of God. Ananias and Sapphira fell dead during the greatest move of God ever known to the world in Acts 5:1-11. Acts 5:3 tells us why they died. Satan filled their hearts (spirits) to lie to the Holy Ghost and keep back part of the money. How could the devil do that? A lack of the character of God in their lives. They opened the door to Satan and he destroyed them. Adam and Eve had the same problem.

I have complete faith that you will listen and develop the character of God in your life. You are not lazy! You can do anything you set your spirit and mind to do and you know it! You will press into God with all your heart and you will be victorious! The key to spiritual and natural success is living according to the principles of the Word of God.

The Lord told me that I could never master myself (develop the character of God) in my strength. Jesus told me that Isaiah 40:28-31 was my key to success. In prayer you receive the ability to live what you have read and studied in the Bible. You will move into a place of power and anointing like you have never known!

Lord Jesus Christ has emphasized to me to develop the character of God in my life. I have great success when I spend consistent time in prayer and Bible study. The Lord impressed me to mediate on and put into practice the following scriptures. It will establish you in the character of God, helping you to master yourself. These are not all the scriptures, but it is a good start.

Read, study, meditate on and practice the following scriptures and remember, God is with us!