Many times, people are looking for something new, something that has never been tried before. The principles of God are not new and they never change. If you find the principles that have been proven from God’s Word, not from some ‘man-made idea,’ but God’s proven principles and put them into practice in your life, it will guarantee you success. 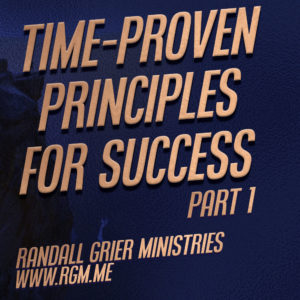 Everyone wants to make a resolution when the New Year comes. It doesn’t need to be the New Year for you to make one. You might have seen success in your life, but God wants us to have more success than we have in the past. He wants us to go forward in the future. So in Joshua, chapter 1, the Lord speaks some things, and says some things to Joshua.

Now after the death of Moses the servant of the LORD it came to pass, that the LORD spake unto Joshua the son of Nun, Moses’ minister, saying… – Joshua 1:1

Who spoke unto Joshua? It was the Lord. But how do you know? Because the Bible says so. I point that out, as simple as it may seem, so that you will always find out what the Bible says. Don’t just accept it because I say it or because it is written in a book. If I learned anything from being under Rev. Kenneth E Hagin, if He taught us anything, it was this: if it can’t be backed up by the Bible, it doesn’t matter who says it – don’t believe it. So that is why I point that out. The Bible says that the Lord spoke. Who did he speak to? Joshua. He gave him some directions.

This book of the law shall not depart out of thy mouth; but thou shalt meditate therein day and night, that thou mayest observe to do according to all that is written therein: for then thou shalt make thy way prosperous, and then thou shalt have good success. Have not I commanded thee? Be strong and of a good courage; be not afraid, neither be thou dismayed: for the LORD thy God is with thee whithersoever thou goest. (Joshua 1:8-9)

Hear The Voice of God

The first proven principle for success in life, above any and everything else is that you need to hear the voice of God. Joshua heard the Lord. It’s good to read a book. I think I have a couple of good books. It’s good to watch DVDs and watch a preacher, but better than all of that, first and foremost, what should you hear? The voice of God.

When you hear & obey the voice of God, it’s going to put you over every single time without fail and you will rise up and be the head, not the tail. Notice that Joshua did what? He heard the voice of God. Why do we need to hear the voice of God? Because that is where success is at. No, it’s not wrong to read self-help materials and watch DVDs and get motivated by hearing a motivational speaker, or even motivating yourself and stuff like that. But what’s better than anything on Earth is hearing the voice of God yourself.

Because when you hear what God says to do and you do it, then you’re going to be a success. I would not be where I am today had I not heard the voice of God. Now how do you hear God’s voice? Sometimes you have to get desperate. Sometimes you have to want to hear God more than anything else in life because there are many voices out there calling. There are many opinions, many different paths that life has to offer. But you have to decide that you’re going to hear the voice of God.

That is the first step to being a true success in life. Push everything else aside, take time out from your busy schedule, and hear God’s voice. God is with you.