When Jesus was walking into Jerusalem one day, He stopped on the mountainside and He looked over at Jerusalem and He wept. Why? The gist of why He wept is because they missed the time of their visitation. God had manifested in the flesh, was walking the streets of Jerusalem and they did not know who He was. He had come down from heaven in the form of a man, the Son of the Living God, Jesus Christ the Son of God, the Lamb of God that taketh away the sin of the world — and they did not know who He was. 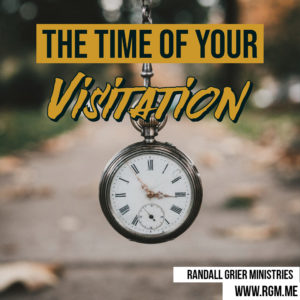 And when he was come near, he beheld the city, and wept over it, Saying, If thou hadst known, even thou, at least in this thy day, the things which belong unto thy peace! but now they are hid from thine eyes. For the days shall come upon thee, that thine enemies shall cast a trench about thee, and compass thee round, and keep thee in on every side, And shall lay thee even with the ground, and thy children within thee; and they shall not leave in thee one stone upon another; because thou knewest not the time of thy visitation. – Luke 19:41-44

Even when He was taken into the temple as a little baby to be dedicated to the Lord like the Law required in that day, they still missed it. After the times of her purification had passed they were to take the baby, every male child, and present him to the Lord and offer different sacrifices, unto the Lord. They took baby Jesus into the temple, who the angel Gabriel had appeared to Mary and told her what His name was and what He would do. When they brought Him into the temple, nobody in the temple knew who He was. Even Mary and Joseph, His mother and father, questioned the experience they had had even though it had been supernatural. They really didn’t know the full ramifications of Jesus Christ and who He was.

They walked into the temple of all the people that were there, filled with hustling and bustling of activity, people coming and going through the courtyards because it was not just a place where you offered sacrifices – it was a place where people came to do stuff. When they came into the temple, only two people knew who Jesus was.

Both of these people who knew who Jesus was received it by revelation from heaven. The way both of them received revelation was because they had spent time seeking God in prayer about His plan, about His will, about His purpose.

So when Jesus was brought into the temple, Simeon was led by the Spirit of God to go up to the temple at once. He was led by God, the Spirit of God, that had gave him the revelation, to go up to the temple and he was going to witness something. He went into the temple. He didn’t know Mary and Joseph, he had never seen them before in his life because they didn’t even live there. Remember they came from another city. They had come from another city to pay taxes. Remember all that happened? They didn’t know who he was, probably had never seen him, maybe never heard of him in their life. That’s a probability.
But Simeon the prophet walked up and he knew immediately when he saw the baby child. He went and he took that child out of Mary’s arms and held that child in his hands and he said, “Now, O Lord, let me depart in peace for my eyes have seen the salvation of Israel.” The salvation of the world really. But he saw it, he knew it, he had a revelation from God.

But the thing I want to point out to you — two people knew who He was. Mary and Joseph had an idea, a big idea because of supernatural experiences. But the prophet Simeon and the prophetess Anna – they knew who Jesus was. How? They knew it by revelation. How did they get the revelation? Through praying and seeking God. They said, “God, what is Your plan? Lord, what are You going to do? Lord, What is Your will?”

That’s what we have to do. Anna and Simeon did not miss the time of their visitation, but Jerusalem did. Anna and Simeon were people of prayer. They prayed and sought God and they knew what God was doing in the earth. If you want to know what God is doing in the earth, then you have to pray and seek God. It’s possible for God to be moving in your midst and you not even know it. It happened in Jerusalem. It happened in the whole earth. But it’s not going to happen to you because you’re going to pray and seek God. God is with you.