And they said unto me, The remnant that are left of the captivity there in the province are in great affliction and reproach: the wall of Jerusalem also is broken down, and the gates thereof are burned with fire. (Nehemiah 1:3)

But what saith the answer of God unto him? I have reserved to myself seven thousand men, who have not bowed the knee to the image of Baal. Even so then at this present time also there is a remnant according to the election of grace. (Romans 11:4-5) 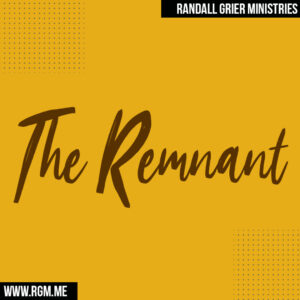 We all have seen a falling away from the Word and Spirit of God in recent years. The doctrines of the Bible have been perverted and twisted to conform to doctrines of devils. Spiritual truths that once governed the church have been laid aside and the ideas of men have been brought into the church to please the flesh, feelings and souls of men and women. Jesus Christ appeared to Dad Hagin on July 16, 1987, and specifically told him to tell the church not to do this. It is in the book “Plans, Purposes and Pursuits”, by Dad Hagin.

We know the story of how The Lord God delivered Israel from Egypt. Moses was ordained by God to lead them out of bondage, as Jesus was sent to lead us out of bondage. One of the first things to occur was that the people rebelled against Moses. They did not like the way he was taking them and wanted to turn back into Egypt. They forgot, it was all God’s idea. It was not Moses’ plan; it was God’s plan.

That entire generation, twenty years old and up, died in the wilderness. They got off course by disobeying the words of Moses, which were the words of God. Two men, Joshua and Caleb, were the only ones, from that generation, to enter the Promised Land. That is a very low percentage rate. That means every other person missed and disobeyed the will of God for that generation. That generation delayed the plan of God, but did not stop those who would obey God in the next generation.

Aaron was anointed by the Lord to oversee the people in the absence of Moses. He disobeyed God because the people wanted to be like the world that they came out of. They pressured Aaron to make them a golden calf so they could worship it as god. He was under such pressure that he compromised what he knew to be true. The ungodly Egyptian culture was brought back into God’s camp by a rebellious people. They entered into the sin of Egypt.

The church generation of today has many of the characteristics of Israel in the wilderness. The respect for the elders that heard from God and gave us directions are mostly rejected. Some have gone as far as to disdain them. Just like the people rebelled against Moses and God’s Word, people are in rebellion today. There is a remnant that is obeying as Joshua and Caleb did. They will go into the Promised Land of the Spirit.

The good news is that there is a remnant that has not bowed their knee to the secular, worldly, fleshly, soulical Baal. This remnant has seen great affliction and reproach because of their stand for the Word of God, the Holy Ghost and things pertaining to the Spirit. Like Nehemiah, I have been sent to this remnant to tell them that our God is with us and that the Lord Jesus will vindicate His people. The greatest anointing that you have ever encountered is right upon you. You will not fail, no matter how bad it has been! God is with us!