I remember years ago I was preaching down in Mobile, Alabama at Tilman’s Corner Assembly of God. I was in my hotel room just praying and walking back and forth looking out the window; waiting for the pastor to pick me up for service that evening. As I was praying I heard footsteps running down the sidewalk of this hotel. 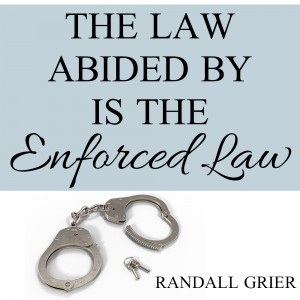 This had been a quiet hotel, since I had been there for this meeting, so the sound of footsteps running down the sidewalk kind of caught my attention. Then I heard this heavy breathing with someone huffing and a puffing. You could tell that whoever was jogging shouldn’t have been jogging. They didn’t sound like they had been jogging much prior to this. You could hear the huffing and puffing all the way down the sidewalk.

Well, I pressed my head up against the glass and tried to peak out the window as much as I could to see what was going on. Finally this person came into view and it was an out-of-shape police detective. He was wearing plain clothes; but had the gun on one side of his hip and a police badge on the other.

He came zooming by the window and I couldn’t see anything, any reason why he was there. Within a minute or two the parking lot filled up with marked and unmarked police cars. Police officers were grabbing shot guns out of their cars and pulling pistols from their holsters. I was just thinking; this would be a good time for the rapture.

Instead of coming towards my hotel room, which was a great relief for me, they went in the opposite direction. There was a little stream next to this hotel, and all these police officers hopped over this stream and disappeared into the woods. It was getting kind of dark so I could see lights in the distance after all these cops disappeared. I was thinking and hoping it was the pastor coming to get me. I felt a surge of relief came as he pulled up and I jumped in the passenger’s seat and slid down. “Pastor, get me out of here quick, they’re after me.”

He started laughing at me, “You crazy thing, they’re not after you.”

I said, “They’re not? What’s going on around here then?”

“What have you been doing?”

“If you’re in Mobile, you better keep your nose on the news. There’s no telling what’s happening down here. These people are shaking and doing all kinds of stuff.”

“You see over there across the road…” I looked over and there was a pick-up truck nose down in the ditch with the back wheels still turning.

“There were three guys. They went over to this grocery store down the street, pulled out some guns, and put a gun to the manager’s head and told the manager to fill some bags with money. Then they took the sacks of money, ran back out, and got in the truck. When they were coming down the road by the hotel, they ran through the traffic signal over there and a car hit them broad side. Then they went into the ditch, nose first. They jumped out and ran down through those woods and the police officers are down there trying to catch them.”

The moment he said that, I got a revelation.

I said, “Now what did you say they did?”

“I said, they went down the road, got out their guns, went in this grocery store, and made the manager of the store fill up some sacks with money from the safe. They came down the road and got hit broad side, which knocked the nose of the truck down in the ditch. Then they jumped out of the truck and took off through the woods.”

“Now what’d you say they did?” I had a revelation.

“You crazy thing. I’m getting tired of telling you. Listen to me now. They went down to that grocery store, robbed it, and came down this road. Then they got hit by a car broadside, and ran into that ditch nose first. They jumped out and took off through those woods. And the police officers are chasing them.”

He said, “I just told you! They committed an armed robbery!”

“You’re crazy, what’s wrong with you,” the pastor said.

“You mean to tell me, those folks did what?”

“I told you, they committed an armed robbery!”

Because they wanted to catch them and tell them about the law that’s on the books, because undoubtably they didn’t know that there was a law on the books that said thou shalt not commit armed robbery. No. The police officers were going to tap them on the shoulder, and turn them around nicely and politely say something like, “Hey, you can’t do that. There’s a law on the books that says you can’t do that and I’ve come to enforce that law and now we’d like to take you to jail quietly, dead or alive. We’re going to lock you up.”