There is the story about a young man who tended his father’s cattle. The land on which they lived was extremely hilly and did not have any flat areas whatsoever. Because of this uneven land, the people were all very careful about the route which they took to and from any given place. One wrong step, being in the wrong place at the wrong time, could mean certain death. Even the “pastures” were on hillsides. The young man wanted to take the best care of his father’s cattle that he could so he always walked them the same route to the grazing hillside; he always kept the cattle grazing in the same direction; and he always returned home with them along another path so as not to disturb the route anymore than necessary. 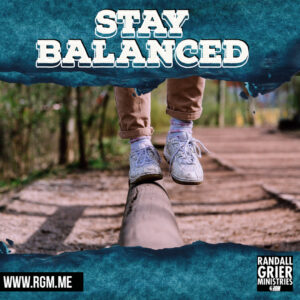 After a few years, the father wanted to get some of the cattle ready for market and see what they were worth. When he called for the sun to bring the cattle, he noticed a peculiar Characteristic of them all. Because they all had walked on such a steep inclines for so long, predominantly in one direction, the growth of the “uphill” side of the animals were stunted and the “downhill” side was over-developed. The cattle were out of balance for life on level ground. Because they were so out of balance, they were worth less than other cattle when they came on the open market. While this unusual growth had helped them survive the environment they lived in, it was not the best way for them to have grown and resulted in an inferior and incomplete herd of cattle.

If only the young man had seen the foolishness of his deeds, he could’ve traveled the animals in such a way that they could have obtained balance growth and become all the father hoped them to be.

God desires us to have balance in our lives as well. If we focus on some particular aspect of life, even some aspect of Christian life more than we should, then we are going to become useless in the kingdom of God except in a limited area. For example, to focus on prayer and not spend a balanced amount of time in reading and understanding God’s word can get you off-balanced in your Christian life. God created the world with balance and order. He created us as balanced creatures. Life tempts us to get out-of-balance. God encourages us to obtain balance. Find the balance of life through Jesus Christ. He always reveals balance and develops us to our fullest potential in him.