Today, it seems we have too many ministers declaring that the people want church to be run a certain way and then going out and permitting it. The church has become too tolerant and allowed the culture of the world to dictate how the the church is run. This has allowed false doctrine to come in and be tolerated as well.

Many now believe that everybody is going to heaven without being a Bible-practicing Christian. This belief is false doctrine, according to the Bible and Jesus Christ. If this was true, everybody would go to heaven without the gospel of Christ. The preaching of the Word would be unnecessary. 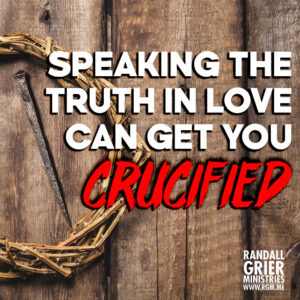 Jesus was crucified because He told the truth when it was not popular. Many have the idea that Jesus was not confrontational. He confronted those who were against the message of His Father by telling them the truth.

Ye are of your father the devil, and the lusts of your father ye will do. He was a murderer from the beginning, and abode not in the truth, because there is no truth in him. When he speaketh a lie, he speaketh of his own:for he is a liar, and the father of it. (John 8:44)

Many may be astonished to learn that Jesus Christ was crucified because he was not tolerant of an unrepentant society in His day. He was murdered on the cross because He told people the truth about the requirements to get to Heaven. He didn’t agree to get along, He spoke the truth in love as a minister should today. Most everyone rejected the message of His Heavenly Father that He preached. He did not change His message to fit the culture of His day. He kept preaching it.

The majority of those who claimed to follow God rose up against Jesus. They were directly responsible for His death. God manifested in the flesh, through Jesus Christ, was unknown to those who claimed to know Him. Could the same thing be possible today? Can the church who says they know Him not really know Him? Jesus Christ did not fit the profile of the Messiah the religious people wanted. It was for this reason they sought to kill Him, mocked Him, made fun of Him and marginalized Him as a kook to all the people.

He was not welcome because of the message He preached from our Father God. The message our Heavenly Father has given us to preach will not be popular with the enemies of the cross of Christ. Notice, this was what we would call church folks that wanted to bust His brains out. But now ye seek to kill me, a man that hath told you the truth, which I have heard of God:this did not Abraham. (John 8:40), Today, most all believe that Jesus Christ preached a message of love and tolerance only. No! He preached truth from God, but He did preach it in love.

Jesus wasn’t the only one to reject the idea of tolerance and accepting false doctrine. The Apostles preached the truth, confronted false doctrine just like Jesus did – just like we are supposed to do.

Then the high priest rose up, and all they that were with him, (which is the sect of the Sadducees,) and were filled with indignation, And laid their hands on the apostles, and put them in the common prison. (Acts 5:17-18)

You don’t get arrested and placed in jail for being tolerant. The high priest and others were filled with anger and were outraged at the Apostles.

The theme of separation is found throughout the New Testament. The whole concept of Christianity is to separate good from evil according to the Bible. Everybody is not going to Heaven, regardless of what people say. There will be billions of people in the eternal flames of Hell fire. There will be a lot of people who attend what is called church, regularly, who will be in Hell also.

I know this is not a popular message but it is a biblical, Godly, Holy Ghost message for the time and season that we have entered into.

Not every one that saith unto me, Lord, Lord, shall enter into the kingdom of heaven; but he that doeth the will of my Father which is in heaven. Many will say to me in that day, Lord, Lord, have we not prophesied in thy name? and in thy name have cast out devils? and in thy name done many wonderful works? And then will I profess unto them, I never knew you: depart from me, ye that work iniquity. (Matthew 7:21-23)

These are the words of Jesus.

The world and many in the church believe tolerance of demonic activity, and compromising the Bible because people disagree with it is love. It is ignorance gone to seed! Nowhere in the scriptures above are we instructed to do so. We walk in love, but we do not disobey the Bible for anyone. Many in the church have compromised sound biblical principles to appease and coddle the younger generation. Some have gone as far as to let them have their way and lead the church just to keep them from getting mad and leaving. Not all, but many of the younger generation have a false definition of love. I have even heard them declare Jesus would attend same sex marriages.

I have heard them say Jesus would understand homosexuals and lesbians and approve of their love for one another. I have heard them say that all people are already forgiven of sin and will go to Heaven. This is not walking in love. It is allowing people to go to Hell because they are not told the truth. Of course, there are many other sins that are embraced, but these sexual sins have invaded our society. This is a season of walking in love and not tolerating sin, or the devil, in your life!