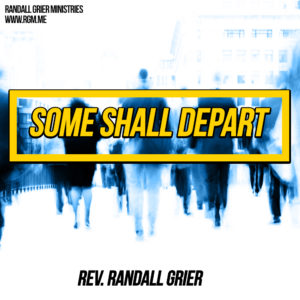 Now the Spirit speaketh expressly, that in the latter times some shall depart from the faith, giving heed to seducing spirits, and doctrines of devils. – 1 Timothy 4:1

When the Apostle Paul is talking about the spirit, he’s talking about the Holy Spirit, the Spirit of Truth, the Holy Ghost. All three are the same thing, not three different spirits – one spirit. He said here that “some shall depart the faith.” Aren’t you glad he didn’t say all? Some, in other words, we have a choice in the matter. “Some shall depart from the faith” How are they going to depart from the faith? By giving heed to seducing spirits.

Many have said, or come up with this idea that this scripture means they never really knew the Lord. That’s not what that says. You have to add to it to make it say that. Or take away from it. Paul said some shall depart from the faith, He didn’t say those that never accepted Jesus are going to depart from the faith. He’s talking about christians, those that have confessed Jesus Christ as Lord. And yes, we’ll throw right on top of the pile – ministers of the Gospel.

I don’t say that to attack, I say it to protect the flock. That’s what the Lord told me, because I was grumbling to the Lord. I said, “Lord, I don’t want to say that. Lord, I want to be nice. I don’t want to say things that hurt people’s feelings.” That’s a good attitude, you know. The Lord said, “You don’t say things, Son, that I tell you, to attack people. You say them to protect My people.”  To protect the flock, things must be declared.

Jesus Christ appeared to Dad Hagin on several occasions and after Jesus Himself gave a revelation to him, do you know what he said? He said to give him scripture. Jesus Christ Himself just gave it to him and he still asked for the Word. Even if Jesus Christ appears to you, you stay with the Word of God. If the Word says it, you say it. Don’t follow after flashy preachers, or ear tingling messages. You stay with the Word of God, whether it tingles your ear or not. God is with us.