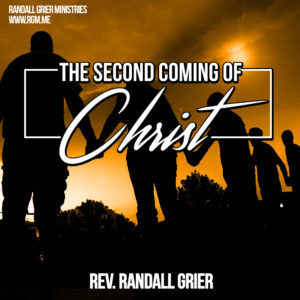 I believe that I saw the second advent, or second coming, of Jesus. I’m not talking about the rapture of the church, though that’s included in it. I’m talking about where Jesus actually comes back to this earth and comes down on the Mount of Olives and establishes His Kingdom here to rule and reign for one thousand years. I believe that I saw this in a moment of special anointing one time. I could have missed it. Remember, I was taught that if you believe you can’t miss it, you already have. So if this doesn’t agree with your spirit, just throw it away and we’ll all see when it happens.

First, there must be an outpouring of the Spirit of God on this earth that the church or world has never seen or known. That is, of course, to bring in the harvest of this earth, but also to get the church back on course. The church must be visited. The outpouring is coming to the church.  Then the church is going to pour it out, through God, on the earth. He’s going to visit His people in a supernatural way, because He’s coming back for a glorious church. So, there must be an outpouring of the Spirit of God. I believe right now we’re in the edges of this. I’m not the only one to see or know this. If you just got a little spiritual intuition, you know these things are going to happen.

Our mothers and fathers in the faith prophesied about these days and said it would happen.  Even Rev. Smith Wigglesworth, before he moved on, talked about the different moves of God that would take place. He said, “The last move of God, before the rapture of the church takes place, would be when the Word and Spirit came together as one.” That’s where we’re at now. If you’ll see our newsletters, the title of it is called Word and Spirit. Several years ago, the Lord said  to me, “You’ve got to transition out of the phase and flow that you are in.”  We were riding the waves, spiritually speaking. That doesn’t mean that wave was wrong. We need to keep what we learned on that wave, but now we get on the other wave of the Word and Spirit. So that we can go on, in God, and help usher in the second coming of Jesus.

There must be a major outpouring of the Spirit of God on this earth, in the church.  The church is going to be used to reach the world.  So, we’ve gotta have an outpouring, an anointing, to reach this lost and dying world. God is waiting for the precious fruit of the earth.  That’s the first step in the second advent or coming of Jesus. The next step is the rapture of the church.

The outpouring of the Spirit of God will bring us to 1 Corinthians 15 which says, “this mortal will take on immortality.” And we’re going to be changed in the twinkling of an eye. We’ve got to be changed. Our physical body is going change and we’re going to get a body like Jesus had when He was resurrected from the dead. He wasn’t just a spirit. He said, “Touch Me.  Handle Me.” He had a body, but it was different than ours. He had a body that would never die. I’m going to get a body that will never die. We’re going to live forever!

Do you know you were never born to die? You were born to live forever. Of course Adam, Eve, and the devil all got involved and messed it up. It’s going to take the mighty power of God to bring the metamorphosis in our physical bodies. If you’re here, your body is going to be changed before You’re raptured out of here. So this great outpouring will edify and build up the church and help the church reach this lost and dying world. It’ll also bring us to a point that the glory is so strong that we’re going to be in the glory and we’re going to be changed by the glory of God.

So that’s the second step.  The first one, remember, is the outpouring that will bring us to number two to be changed and then, of course, part of that change is the rapture or the catching away of the saints.

For the Lord himself shall descend from heaven with a shout, with the voice of the archangel, and with the trump of God: and the dead in Christ shall rise first: Then we which are alive and remain shall be caught up together with them in the clouds, to meet the Lord in the air: and so shall we ever be with the Lord. – 1 Thessalonians 4:16-17

The third phase or step would be when Jesus Himself comes down out of heaven. If I’ve been told right, it will be to rescue the Jewish people at the Battle of Armageddon. When I went to Israel, I stood there on Mount Carmel, where Elijah called down fire and all the prophets of Baal were killed, and I looked over to the Valley of Megiddo. They say that’s where the battle is going to take place. Jesus Christ is going to come back to the Mount of Olives, and it’s gonna split in two, if they got all this stuff right.  That will actually be the second advent or coming of Jesus Christ to the earth.  Outpouring, catching away of the saints, second coming of Jesus when we rule and reign with Him for a thousand years.

Ladies and gentlemen, our finest days are ahead of us. God is with us.