And Isaac digged again the wells of water, which they had digged in the days of Abraham his father; for the Philistines had stopped them after the death of Abraham: and he called their names after the names by which his father had called them. (Genesis 26:18) 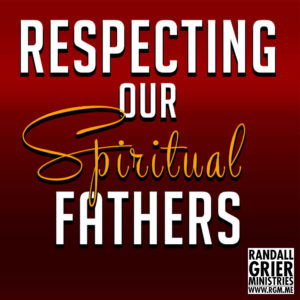 The future anointing of the church is linked to the past anointing of the church. We do not go back and build a monument and camp out, but we build on the foundation of our spiritual elders and fathers. We can follow them into the move of the Spirit for our day and then move on from there. We should always be learning and growing in things pertaining to and of the Holy Ghost. (1 Cor. 12:1)

Isaac opened the wells that had been dug many years earlier by his father, Abraham. He had great respect for his father and called them by the same names that his father had given them. Sincere ministers and Christians search for the true biblical doctrines of the church, the plan of Jesus Christ for the church, and the move of the Holy Ghost today. We must make use of the discoveries of our spiritual fathers, or we will waste much time and move away from the things of the Spirit. We have to inquire of the spiritual wells which our fathers dug, which the adversaries of truth have stopped up, and teach this generation what our spiritual fathers taught us.

We live in the information and technological age. Information seems to come to us at the speed of light (186,000 miles per second). The pressure is on to identify with the world to the point of compromising what we have been taught by our spiritual fathers, to be accepted – cool, hip, modern, and up with the times. I agree society is different from what it was a few years back, but it is also different in that there are looser morals, values, and an anything goes mentality. It is getting progressively worse, almost daily, and there is a reason.

I am not against using modern equipment to proclaim the gospel and we use it in our ministry. I am not for using sensual, mood setting devices to enhance the physical, soulical experience of a person in a church meeting. Jesus Christ is not for it either, because He told me so.

This has been declared the visual generation because of the electronic advances made in this area. Society is bombarded with visual images almost every waking moment. Fashion, style, and looks are the dominating criteria on how a person is accepted. This causes people to be constantly aware of the visual or physical realm. When this visual, physical realm is reinforced in church, Christians have a tendency to live by their senses instead of being led by the Spirit of God.

The light of the body is the eye. More demons enter people through the eye gate than any other way in our society. Almost all lusts, murders, robberies, rapes, molestation, and violence, etc occur because the person has first seen a visual image of it. Most TV and movies have become a hellhole for Satan to take advantage of people by entering their mind through the eye gate of their bodies. I came from that lifestyle, I know.

The People Want These Things

The protest is made, “But the people want these things.” It still does not make it right, good, or advantageous for them. The people that want those sensual, physical things are spiritual babies and don’t know any better.

When my son was four or five years old he wanted to take a butcher knife and cut a watermelon. I slapped his hand, as he reached for the knife, and grabbed it before he did. My son was a baby and didn’t know any better, but I did, and I let him know it by correcting him. Why? Because I loved him and didn’t want to see him get hurt. I knew he was in danger, but he didn’t. I am his father and I am to protect him and teach him right from wrong, not let him do things that will harm him. Spiritual babies have to be corrected and trained in the same way. Yes, there will be a lot of whining, crying and protesting from them, but correction must come for their own spiritual well being. Spiritual fathers must arise and take their place and teach this generation about the ways, operations, and manifestations of the Holy Ghost.

Train And Correct Before It Is Too Late

Train up a child in the way he should go: and when he is old, he will not depart from it. (Proverbs 22:6)

In the natural, you can wait too long to correct and train a child. Once they reach a certain age, they can do what they want to and don’t have to submit to your correction. If you waited too long, it becomes too late and you wish you had corrected them before now.

Rev. Kenneth E. Hagin used to say that neglect brings regret. I know, by the Spirit of God, that many spiritual babies are going to be lost back to the world system if they are not corrected now. Many older Christians will be caught up in this mentality and will fall away also, if measures are not taken to bring the church back into the middle of the road – back to what is right and wrong, and being led by the Spirit of God, instead of the flesh and what feels good. Morals and values, commitment, paying the price, and crucifying the flesh are some of the truths that must be proclaimed loudly in this day. I pray God will raise up a loud voice to proclaim these things throughout our land. I have prayed that way for years now and still have faith.

Noah proclaimed Godly truths to his generation and no one seemed to pay attention. He told them that God’s judgement was coming and to prepare for it. I assume they thought He was crazy and an old fogie. The day came that God told Noah to enter the Ark and then God shut the door, not Noah. It was too late after God shut the door.

Warnings From The Past

I was praying with several people, about eight months before September 11, 2001. I had a vision. I saw airplanes running into buildings with devastation, destruction and people running every where. The Lord told me to proclaim it to the prayer group and I did. About eight months later, it happened just like I saw it. It was confirmed by the group.

I was praying with another group of people on September 8, 2000. I had a vision of a demonic cloud spreading from the Atlantic Ocean to the Pacific Ocean. The Lord said, “The two people that stand at the forefront of what is called the “Gold Dust Phenomenon” will be removed from the scene because they are deceiving many with these demonic miracles. I have given them space to repent and they have failed to do so.” That was on a Friday and on Friday of the following week, the first one died and the other died in about six months. (I had no knowledge of these people’s actions before this experience.) It was confirmed by the group.

I was in a restaurant, years ago, and someone called my name. I looked to see who it was. When I looked at the person, I saw what looked like a white mask on their face. It was a pastor I knew. The Lord said, “Two weeks from today, they will fall dead in their pulpit.” They fell dead just like the Lord said.

In September 2004, while praying with a group of people, I had a vision of devastation and destruction coming on the United States. The Lord said, “Judgement is coming to the U.S. in 2005.” It happened just like the Lord said. It was confirmed by the prayer group.

In the last five Presidential elections the Lord spoke to me, during times of prayer, and told me who the next President of the United States would be and what He thought about them being President.
I could write more about experiences I have had along these lines, but that is enough. Most of them I don’t particularly care to have or proclaim. They happen as the Spirit of God wills, not me. I only mentioned these in hopes that people will give heed to what has been said.