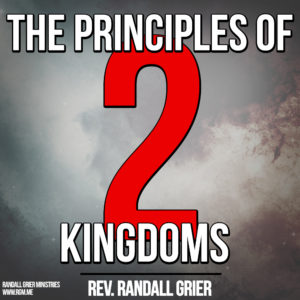 It is the devil doing it.

There are two kingdoms that are at work in this earth. You must understand the laws and principles by which they function. If you do not understand them, you can be in the wrong kingdom, functioning under the wrong laws and getting the wrong results in your life. The Bible says in Romans chapter 8, The law of the spirit of life in Christ Jesus has (past tense) made me free from the law of sin and death.

There’s a law of the spirit of life that’s at work in the world – that comes from the kingdom of God. Then there’s a law of sin and death that’s at work too, because Adam and Eve pledged allegiance to the devil. Because of that, mankind has fallen way beneath the pristine glory that God intended them to walk in and the earth has been under a curse ever since. Because of that curse, the devil is going about seeking whom he may devour, trying to bring evil on people. So there are two kingdoms on this planet, and each one of them has a principle that they function by and you must understand that.

Number one – there’s a kingdom of darkness that Satan is the author and operator of, and he’s the one that runs it. His kingdom operates by one principle and one principle only, and that principle is fear. Whatever Satan can get you to fear, he can bring it to pass in your life. The Bible says the thing that Job greatly feared came upon him. A lot of people think that God put those things on Job. You better go read your Bible. God did not put them on Job. The devil did. How did the devil get in there?

He got there because Job was praying in fear. He was not praying in faith. Just read your Bible and see it for yourself. Job feared that something bad was going to happen to his children, so he was constantly praying, but his prayers weren’t doing any good because he was operating in the kingdom of darkness, but he didn’t realize it. So Job opened up his whole family and everything he possessed to the devil.

God is a blessing God and He wants you blessed. Now you can grumble, you can complain and you can gripe or you can stand up and fight. You can grumble, complain, and gripe about how your life is, what they didn’t do or what they did do, or you can stand up and fight. You can fight your way out of your situation, not in the sense that you’re trying to defeat the Lord or nothing like that, but as in 1 Timothy 6:12 Fight the good fight of faith, lay hold on eternal life, whereunto thou art also called, and hast professed a good profession before many witnesses.

Sometimes you’ve got to do like an old bulldog with a bone and lock your jaw, so to speak, around something that you know belongs to you and don’t let go of it! You’ve got to fight the fight of faith. Why? Is it God trying to keep it from you? No! It’s the devil trying to keep it from you. How does his kingdom operate? Fear. The devil’s kingdom, the kingdom of darkness operates by one principle, only one.

Now there’s a lot entailed under that principle, but one principle you must understand – if he can get you to fear something or talk bad about your life, your children or your job, then he can get it into your life. I’m talking about speaking negative. You know what the devil does? He capitalizes on your words and makes them come to pass.

Remember, if it’s coming to you and causing you to fear – it’s not of God. Rebuke it in Jesus’ name. Satan is always trying to get you into fear or to believe things contrary to the Word of God. Don’t do it.