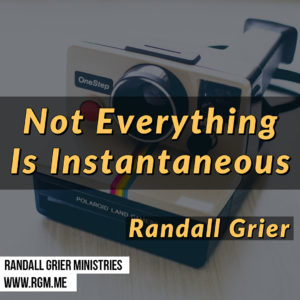 What happens if you plug it back in? The lights come on. That’s because you plugged into the power source. To receive from God, you have to plug into His power. I’m not talking about forcing God to do something He doesn’t want to do. You can’t make God do anything He doesn’t already want to do. Do you know why?
Because He is bigger than you.

You’re not going to make or force God to do anything He doesn’t want to do. So if you find out what He already wants to do, you can plug into God’s power and get an answer from God without having to wait for a prayer line at church or for the gifts of the Spirit to operate.   We have to understand though, that God doesn’t work the same in every situation. Not every answered prayer comes instantaneously. I’ve had prayer lines in the hundreds, if not thousands, and I have seen people instantly, miraculously healed. And I’ve seen people walk away that look like nothing happened at all. I always tell those people to keep the switch of faith turned on. If the enemy can tell you that you didn’t get your miracle, and you believe him, you won’t get your miracle.

There is an element of faith to receiving from God. And if you will keep the switch of faith turned on, you will always get what you pray for. Not everything that God does is instantaneous. Everything He does is miraculous, but not always instantaneous. Look at what happened to the ten lepers that Jesus healed.

Now on his way to Jerusalem, Jesus traveled along the border between Samaria and Galilee. As he was going into a village, ten men who had leprosy met him. They stood at a distance and called out in a loud voice, “Jesus, Master, have pity on us!” When he saw them, he said, “Go, show yourselves to the priests.” And as they went, they were cleansed. One of them, when he saw he was healed, came back, praising God in a loud voice. He threw himself at Jesus’ feet and thanked him—and he was a Samaritan. Jesus asked, “Were not all ten cleansed? Where are the other nine? Has no one returned to give praise to God except this foreigner?” Then he said to him, “Rise and go; your faith has made you well.” – Luke 17:11-19

Did they get healed instantly? No. They got healed as they went. So not everything we receive from God is instant. However, everything that we believe God for, we will receive. Some will be instantly, some will come as you go.