The Lord said to me during a meeting, “You’re transitioning into a time of harvest world wide.” That was the word of the Lord that came to me. But then I got revelation behind that. That happens some times. The revelation was this: The harvest would be two-fold. Number one, it would be the precious fruit of the earth. God wants people to be born again. Jesus is waiting for the precious fruit of the earth. That’s what He’s waiting for before he comes again. Number two, harvest of seed. Did you know that every seed has the harvest built into it? If you plant a butter cup flower, the butter cup flower is in that seed you plant. If you plant a tomato seed, the tomato plant is already in that seed. 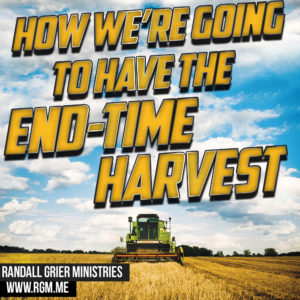 The Lord said there would be a harvest worldwide. It will bring in the precious fruit of the earth. However, some of the seeds that have been sown, especially from the nations, seeds that they have been planting in their soil, sort of speak, they are going to reap a harvest off of that. It’s not just nations, but especially nations. Every seed has a predetermined harvest. Every seed.

The Bible says that seedtime and harvest will not fail, from the time the earth was created until the time that it’s all over (Genesis 8:22). So know that when a seed is planted, there will be a harvest.

Be patient therefore, brethren, unto the coming of the Lord. Behold, the husbandman waiteth for the precious fruit of the earth, and hath long patience for it, until he receive the early and latter rain. – James 5:7

Look at that again. Who is he talking about here? He’s talking about people who have received Jesus as their Lord and Savior. Notice, what does it say that the Lord is waiting on – the early and latter rain. He’s got to have the rain. We need the rain.

It’s the rain of the spirit. He’s usually a natural analogy to convey a spiritual truth. If God is going to bring in a harvest, there must be rain. and somebody has to sew the seed. The seed of harvest is the Gospel of the Lord Jesus Christ. So we need to pray two-fold for the harvest to come in. We need to pray that the early and latter rain be poured out in the nations, in our nation, on the earth. And then we need to pray that labors would be sent forth to scatter the seed. Every seed has a predetermined harvest. The word of God is a predetermined harvest. When you preach that, that’s how revival takes place.