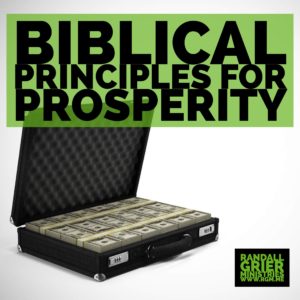 Kenneth E. Hagin once said, “Did you ever notice that you have more problems in the area of finances than in any other? The devil will fight you harder here because he has more leverage in this area. Money is in this world, and he is the god of this world.” (See 2 Corinthians 4:4). You must use your faith, sow financial seed and command the devil to take his hands off of your money if you are going to prosper financially.

On September 11, 2001, the trade towers fell and the terrorist attacks took place in our nation. Our ministry lost 60% of our monthly support because of the fear that spread over the nation. That occurred October 2001. We had experienced short financial months before and always bounced back. I assumed that is what would happen again.

I prayed and the Lord told me to get the mini book entitled, “How God Taught Me About Prosperity” by Kenneth E. Hagin, and read and meditate on it until I believed it enough to act on the revelation, in faith. I had read that mini book many times over the years and had put it into practice some. I had forgotten all about how the devil tries to keep money from coming to us. I had been believing and sowing what I could, in my situation, but I forgot to command the devil to loose my money and let it go. I knew the devil was defeated, and the devil knows he is defeated. I still had to exercise my authority over him in the name of Jesus for that fact to be a reality in my life and ministry.

I went and got a copy of the mini book and read through it several times. I began to study it and highlight different portions that seemed significant to me. Jesus, had spoken to Dad Hagin and told him the answer to his financial problems in this book. I knew those principles would work for me, if I would believe them and act upon them. I was looking forward, greatly, to having that financial pressure off of me!

There were four major points in the book that Jesus told Dad Hagin to do. Number one, was to claim whatever it was that he wanted or needed. I would like to add here, that you can’t just wildly claim anything. You have to start where you are in faith. I know one friend of mine who started out claiming one dollar. Second, command the devil to loose your money and let it go! Third, say, “go ministering spirits, and cause the money to come.” Number four, was every time you think of it from then on say, “thank God it is working.” You are simply to stay in faith about it.

I began putting these truths to work for me and things began to change. Progressively things got better and better for us financially. I encourage you to sow financial seed and put these truths into practice in your life. You cannot expect a financial harvest unless you sow a financial seed. It takes faith to sow and reap; and it is faith that pleases God. God is with you!