I discovered the absolutely best, most effective, God pleasing way, to communicate the Gospel, by accident. I was thrust into a pastoral position by the vote of the convicts in the church I attended in prison. I also had approval of the free world prison chaplain, Rev. Curtis Browder. The position was open because the previous convict pastor got transferred to another prison. 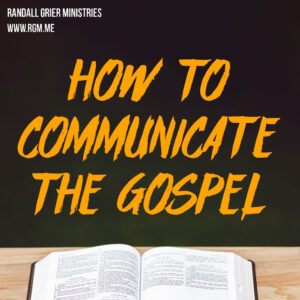 Our little church had a handful of convicts that attended regularly and half of them were backslid. I had gloriously came to Jesus while on my third escape from prison. I turned myself into the authorities and returned to prison. I prayed and studied the Bible constantly.

When I was elected as pastor, I didn’t know what in the world to do. I had no training in how to preach a message or in communication skills. I didn’t want to be in front of people and was an introvert socially. I had nowhere to turn or books to read, internet or other source that I could learn from. Thank God!

That meant I had only one source: the Lord Jesus Christ. It turned out to be a great idea because I found out that He was the head of the church and knew exactly what He wanted done in each service. It wasn’t up to me; it was up to Him and always is for those who desire His plan. I struggled, at first, as I tried to run the church with my methods and ideas of others in attendance.

On My Knees Under The Pew

I soon discovered, by experience, that the Spirit of God was quenched by my human methods (1 Thess. 5:19). We stumbled through each service and the atmosphere was charged with doubt and oppression. The convicts were lifeless and hopeless at the end of each service. We had church services seven days a week so I used a lot of human effort before I learned.

Finally, a miracle happened and I discovered I didn’t know what to do, nor did anyone else. I started praying and asking the Lord what I should do. At first, it would take several hours of prayer before I got in the Spirit enough to pick up on what the Lord was saying to my spirit. The Lord Jesus revealed to me that He had a plan, purpose and message for each service. I was greatly relieved and filled with joy! All I needed to do was to stay in fellowship with the Lord and ask Him what to do.

I asked for special permission to go into the little meeting room before the service started and pray. The captain of the guards granted me permission to go in by myself, ten minutes before each service. The guard on duty would unlock the door, let me in and lock me in. I would go to a little wooden pew in the corner of the room, kneel down on the concrete floor, and place my head under the pew. I would pray and ask the Lord for His plan for the service. He would always, always give me a verse, a song and show me things to do in the service.

The services were glorious and the convicts were saved and our church started to have many more in attendance. The Lord was the head of His convict church and He was so happy that I chose to follow Him. He added people to the church, almost daily, like the Bible said He would. Our attendance went from a handful, to a little over 120 in about six months. These convicts didn’t have jailhouse religion. They had Jesus in their hearts! They prayed and sought God just like I did.

The Spirit of God would move on the convicts and they would dance, laugh, speak in tongues and interpret in the Spirit. All this occurred while we all followed His plans. We had never been taught this by anyone at all. The Spirit of God was in charge of everything that happened, not me. The news traveled to other convicts in other prisons and they did their best to get transferred to our prison church to be where God was in charge and working miracles. There were so many miracles that occurred that I don’t have the space to list them. We prayed and God answered! Satan was driven from the prison by the convicts’  praise to God.

Those Christian convicts walked in total dominion over Satan and all his demons. The demon-possessed would come to services and fall down, overpowered by the Spirit of God, and we would cast the demons out and get them saved. The power of God flowed freely among us as we followed His plan.

The best way to conduct a church service and communicate the gospel is by praying and asking the Lord what He wants done and do it.

It is not by asking the coach, the general from past military wars, popular business men, social media statistics, communication specialists, or people research groups. The church was not founded to be a social gathering, even though we do gather for fellowship. It was first and foremost founded by Jesus Christ to be a spiritual gathering. Everything else that occurs in the church should be submitted to what Jesus Christ desires. Jesus Christ is the head of the church, not me, or anyone else. We are to be led by His Spirit, through prayer. The door to the devil is closed when we adhere strictly to the Bible and follow the Holy Ghost. Otherwise the devil will get in and cause problems.