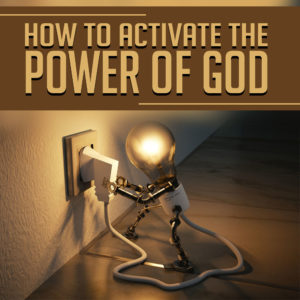 “That it might be fulfilled which was spoken by Esaias the prophet, saying, Himself took our infirmities, and bare our sicknesses.” – Matthew 8:17

The Father God sent Jesus to heal the diseases of humanity and meet our needs. Here we have what we would call physical miraculous healing. We could all agree that this was a miracle. But noticed how the miracle power of God was initiated. It was initiated by the woman touching the hem of Jesus’ garment – where the power dwelt. She’s the one that initiated the healing of God, not Jesus.

Even though God desires to do something in our life, including healing, that doesn’t mean it’s automatically going to happen. We have to do something. It was the woman that initiated her own healing, even though God was already willing to heal her. For us to initiate the activation of God’s power – whether it’s for healing, provision, answered prayer – whatever, we need to do the same thing as she did.

Continually declare your faith. It’s not just a one time event. Continue to thank God for what He has done and declare the Word over your life. As you do, your faith is going to grow because faith comes by hearing. The third thing she did was act on what she believed (v.27-28). She did what she said. Faith is an act. If we have faith, we will act. The woman said that she would be healed if she touched Jesus’ clothes, but nothing would have happened if she didn’t touch His clothes. She had to act and you do too.

I know these things may seem like a broken record. Many of us have heard these things over and over. But are we doing them? It does us no good if we’re not doing what we know. There is power in your house that is laying dormant until you flip the light switch. Then the power is activated to cause a change in that room – driving out the darkness with the light. You do the same thing – activate God’s power. God is with us!