Seducing Spirits are operating today in our nation on a level like never before. They are trying to hinder the plan of God in the earth and in our nation. They have gotten into churches and places that you would never have dreamed they would be able to get into. Even the pentecostal churches – those once baptized in fire with the Holy Ghost and the gifts of the Spirit in operation are being pressured to calm down, tone down, and turn it down a little bit because they might scare somebody off. That or somebody might get offended. 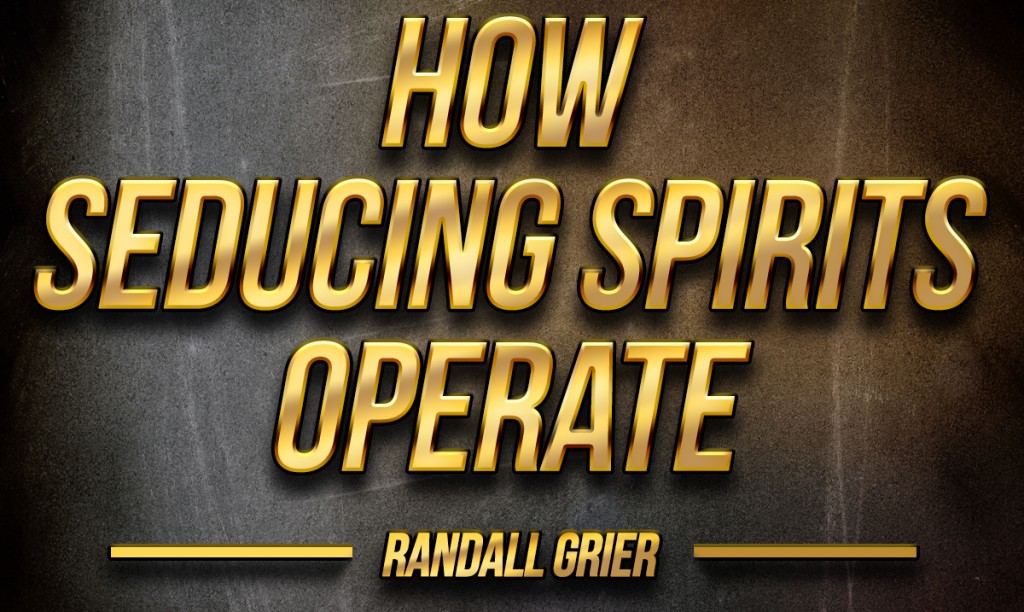 There are seducing spirits and doctrines of devils that have been released in the earth today to get people to calm down the Holy Ghost, put Him in the back room, and eventually push Him out the back door and say He’s not even welcome here anymore.

We must be aware of seducing spirits and doctrines of devils. Be aware of them. The Bible says that the devil transforms himself into an angel of light. The devil doesn’t always come in with fangs sticking out, frothing at the mouth, growling like an animal with a pitchfork and horns looking like a monster. No. He transforms himself into an angel of light because otherwise he couldn’t deceive anybody.

Now the Spirit speaketh expressly, that in the latter times some shall depart from the faith, giving heed to seducing spirits, and doctrines of devils; – 1 Timothy 4:1

Take heed unto thyself, and unto the doctrine; continue in them: for in doing this thou shalt both save thyself, and them that hear thee. – 1 Timothy 4:16

There are doctrines of God’s Word – scriptural truths, that have been passed on to us by those anointed by God to write the Bible. One of the truths that is being taken away is the doctrine of laying on of hands for healing. Now some have had them wiped away for years in their churches and don’t believe it anymore. Some don’t believe that healing belongs to us today, and haven’t believed in it for many, many years. Now there’s a push on in a greater way to absolutely do away with healing.

Another doctrine that people are trying to get rid of is the baptism of the Holy Ghost with the evidence of speaking in tongues. They’re trying to keep the Holy Ghost out of the service. Why does the devil want the Holy Ghost out of the service? Because he’s offended by Him and doesn’t want Him there. The devil sends seducing spirits into a place to convince them that the Word of God is not true or God didn’t mean what He said. That’s what the devil has done from the beginning.

The Lord showed me how these spirits operate. Seducing spirits don’t always cause failure immediately. Seducing spirits will bring you success – if you’ll listen to what they tell you. If you can be bought, if there’s a price that you’ve got, the devil will pay it. Remember he tried it with Jesus. The devil took Him up and showed Him all these things and offered to give them to Jesus. If there’s any of those things that you want more than Jesus, the devil will give them to you.

For a while, it will look like you’re successful, prosperous, going the right way, take off like a rocket. That’s why all these churches that are going against the the Word of God and against the Holy Ghost look like they’re growing like weeds. The devil is working a plan to set you up for ultimate failure, but it doesn’t happen right away. Success does not mean that God is blessing you. It could very well mean that the devil quit messing with you. He does that so you can have a measure of success for a short period of time because in the end, he’s going to destroy you.

The only way that you can stay on track with God is to stay with the Word of God and with the Holy Ghost. Whatever the Holy Ghost says will line up with the Word of God. If you want to stay with God, stay with His Word. He will never violate His Word. At the same time, you have to set Jesus Christ as your Lord and your Savior. Nothing can come between you and Him. You can’t give the devil a foothold into your life. If you have a price, the devil will pay it.

Don’t fear. God is with us.