Fight the good fight of faith, lay hold on eternal life, whereunto thou art also called, and hast professed a good profession before many witnesses. – 1 Timothy 6:12 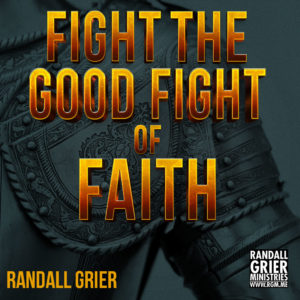 I was in a small town one time preaching a meeting at a church. While waiting for the pastor to pick me up from my hotel, I heard footsteps running past my room. I looked out and saw a few men running down the sidewalk. Then I heard helicopters and police sirens. A few minutes later the pastor picked me up and I asked what was going on. He told me that there were a couple of men that just got done robbing a grocery store and the cops were chasing after them. After I had the pastor explain it to me a couple of times to make sure I got it clear, I told the pastor that they couldn’t have been doing what he said. He looked at me like I was crazy. I told him that those guys couldn’t have done that because there is a law on the books that says you can not steal from people. God gave me revelation that day. Even though there is a law on the books that says it is illegal for people to steal, people still do it. That’s why we have law enforcement officials to enforce the law that is on the books.

Look at it this way – do you know what those white rectangular signs are on the side of the road that have numbers on them? Usually those numbers will be 55, 60 or 65 or something like that? They usually end in a zero or five. Those are speed limit signs.

And you know that as you drive down the highways, with a bunch of other cars beside you, that as soon as one of those signs comes up, everyone slams on their brakes. They do that because they see the sign and realize they’re not going the right speed limit. And so in unison they all slow down. No, that doesn’t happen, does it? It doesn’t matter if it says 55 or 60, you have people on the road going 70, 75, or more. You have people that are in such a hurry that they’ll pass you when there’s not even a road to pass on. But you just wait until you see a law enforcement officer coming up among all those cars and everybody grows angel wings. Everybody all of a sudden knows what the speed limit is and they’re obedient to what the law says.

The devil doesn’t obey the law just because there’s a law on the books that says he is defeated. He has to have someone to enforce that law. That is what we do as Christians. We enforce the law that Satan is defeated that is already on the books. We are law enforcement officials. You have been deputized by God.

If you do not enforce Satan’s defeat, Jesus is not going to do it for you. He already defeated him, but he left it up to us to enforce that defeat. We are to fight the good fight of faith. We must stand in faith. We must believe God. We must lay hold of those things that God has given to us. You can never be passive when it comes to issues that we’re facing today in the world. You never take a passive position when it comes to the devil.

Dad Hagin Knew What To Do

Dad Hagin was holding a meeting in California one time and everybody in the city was getting the Asian flu and people were getting scared. People wouldn’t get out. Where usually they would have large meetings, they would only have 40 people or so show up. The pastor asked Dad Hagin what he was going to do. Dad Hagin said he was going down there and preach. It didn’t mater if it was him and one more. He was going to go preach.

So he got down to where they were holding the meeting and there were a couple of preachers standing around. Preachers. And the preachers were talking about this virus and how it was going to get them. And Dad Hagin said to them, “I just want you to know, I’m not going to get the flu. And there isn’t any virus that is going to take me over.”

One of his preacher friends leaned over and whispered to him, “I wouldn’t say that if I was you.” Dad Hagin asked him why not. And the preacher replied, “The devil might hear you.“

Dad Hagin told him that the devil was the exact person that he wanted to hear it. If you hide in fear, you make yourself a candidate for the devil to come near. But Dad Hagin did not get sick. He did not get that virus. It did not come near him. Why? Because he was proactive. He stood against it. He fought the good fight of faith. He enforced the devil’s defeat with his faith and with his words.

Not all men have faith, you know. We do though. You do. I do. We have to exercise that faith. And that’s an active thing. Faith is an action. The Bible says that God has not given us a spirit of fear. If Satan can get us to fear it, he can bring it on us. But if God can get us to have faith to stand against it, then the powers of darkness cannot come near our dwelling.