Now the spirit speaketh expressly, distinctly that in the latter times some shall depart from the faith, giving heed to seducing spirits and doctrines of devils; – 1 Timothy 4:1

Latter times denotes a specific time period. This prophecy that was spoken by the Apostle Paul was for a specific time period. We believe the latter days, we began to enter into them at the beginning of the church age. Certainly we’re at the end of the latter days in this age. We know it was applicable in that day, so it is certainly applicable in this day. 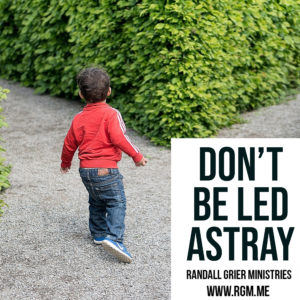 You know that the enemy is going to do his best, and has tried his best to get the church out of the proper flow and stream of God. Because of that, many live in a place of confusion. Many don’t know which way to turn. Many don’t know which way to go. There’s a lot of voices in the church world. I’m not talking about just in the world, though there are voices there too. I’m talking about in and among us – the church, the Christians, the ones that claim to follow Christ.

What the Holy Ghost wants to do for us is dispel all confusion, get rid of all the myths and things that are not right – that are keeping us separated and divided. Many people say we ought to just all come together. Jesus said, “I didn’t come to bring peace, I came to bring a sword.” He said I came to bring division. In the end, what He’s going to do is divide right from wrong. If you’re going on with God there is a side you have to get on. There’s a flow and stream that you have to be in.

The reason there’s so much confusion in the body of Christ and they don’t know which way to go, is because there’s too many voices that are speaking the wrong things. When we allow the Bible to become the Constitution of Christianity and not violate it or change it, then that’s the only time we’re going have unity.
Where we don’t unify is where people don’t adhere to the Bible, or when they say the Bible doesn’t mean what it says, or they take scriptures out and say that’s not applicable to us today. Certainly it’s going to bring division, especially with me, because I’m going to believe the Bible. I swallowed the Word hook, line, and sinker – as we’d say in the country. It’s got me, and I’m not turning any which way.

If you’ll notice, in the church, a lot of times what happens is that the spirits that are in the world will get in the church. What’s going on in our nation today? In our nation today, there’s such division in the world system as to what’s right, what’s wrong, even the Constitution of the United States of America is called into question and it’s being violated every single day.

The world system says there’s no absolute rights or wrongs. There’s something called ‘situational ethics’. That means, it’s according to what situation you’re in as to whether what you do or how you respond to that situation is right or wrong. No. If the law says it’s wrong, it’s wrong. Even immigration has become a big factor. There’s laws on the books already. You don’t have to pass another immigration law. Enforce the law that’s already there. That’s what you do. All the smoke and shadows and smokescreens that come up are to divert attention away from what we should actually be doing.

We say that about the world and you shout about the world. Hallelujah! But we have the same thing in the church. That same spirit of rebellion and confusion. People not knowing where to go and what to do. Confusion is at such a high right now, that people are actually living in sin and think they’re serving God. There’s many people that are going to be held accountable for this when we stand before our Lord and Savior, Jesus Christ.

I know this is an ugly word and it’s cursing, but we’re all going to stand before the judgment seat of Christ. Every born again christian is gonna stand there. Everybody that’s not born again is going to the great white throne judgment. All will be without excuse. We look at the sinners ‘you low down thing, yeah, you’re gonna stand before God, yeah, you’re gonna be a crispy critter.’ We shouldn’t have that attitude. We should be trying to reach them. But at the same time, we forget that we ourselves are going to stand before the judgment seat of Christ to give account for what we have done while we’re on this earth.

There’s confusion in the body of Christ. Why does the confusion take place? Why did the Holy Ghost, through the apostle Paul say these things? How is it going to happen?

…that in the latter times some…

Aren’t you glad he didn’t say all? Some, in other words, we have a choice in the matter.

…some shall depart from the faith,…

Many have said, or come up with the idea, that it means they never really knew the Lord. That’s not what that says. You have to add to it to make it say that. Or take away from it. He said some shall depart from the faith. He didn’t say those that never accepted Jesus are going to depart from the faith. He’s talking about some Christians, those that have confessed Jesus Christ as Lord. And yes, we’ll throw right on top of the pile – ministers of the gospel.

He said, “You don’t say things, Son, that I tell you, to attack people. You say them to protect My people.” To protect the flock, things must be declared.

In James chapter 2 it says faith without works is dead. I like to say it’s futile and self-deceptive. If you say you believe something, if it doesn’t drive you to action then you really don’t believe it. If I said I had a rattlesnake in my pocket and I pulled it out and I shook it and you saw it flopping and everything and I said I was going to throw this rattlesnake on you, what would you do? When I drew back, and you believed it, it would create some action. You’re going to put your feet in gear and run, hollering “that man is crazy!” You believed it to the point that it brought action in your life.

That’s what true believing in Christ is. If there’s no action, there is no belief. I don’t care what they say. It’s not Bible. You can say, “I believe in Jesus” all day long, but if your lifestyle doesn’t agree with the Bible, do you really believe? I’m not say you can’t slip and trip and God forgive you. But, if you’re purposely disobeying God and saying you’re believing in Jesus, you are in a heap of trouble.

The concept has been declared, that’s brought confusion – that you can do anything, live any old kind of way you want to and everything is going to be alright. No. It. Is. Not.

…some shall depart from the faith, giving heed to seducing spirits and doctrines of devils.