There are many in our nation, Christians included, who are arguing on social media, demonstrating, and placing blame on political leaders for all the problems going on. Shortages, high prices, limitations on our freedoms are all being blamed on this politician or that, this party or that. 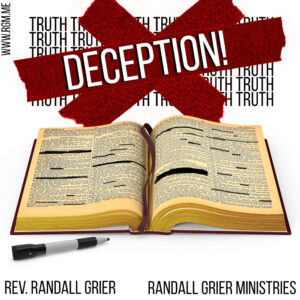 Most Christians are not aware of the unseen spiritual realm that overrides this physical world we live in. Sinners, witches, witch doctors, new age practitioners, heathens, psychics, mediums, sorcerers, tarot card readers and the world in general, are more aware of the spirit realm than Christians are. It is because of this, that it is hard to convince Christians of the ability of Satan to work miracles. I had demonic encounters before I was born-again so it was no problem for me to believe in satanic power once I was saved.

“Now the Spirit speaketh expressly, that in the latter times some shall depart from the faith, giving heed to seducing spirits, and doctrines of devils;” – 1 Timothy 4:1

The strategy of satan against the church is not to oppose or attack, but to infiltrate the church through deception. Satan is a seducer and deceiver; he is clever in his tactics. He knows that any opposition from without, even by a vastly superior force, has never worked. Satan’s strategy is to infiltrate and desensitize the church to accept his ways through seduction. And in many places, it has worked.

The doctrines of love and grace have been pushed to the extreme by seducing spirits of Satan. The church has been taught not to judge anything, but to accept everything that comes into the church. If you judge something, by the Bible, to see if it is of God, you are attacked by the church for being critical and judgmental.

Whole denominations have now accepted things that the Word of God calls an abomination. Things of the world have become more important than things of God. Culturally relevant became the new buzz word. Casual Fridays invaded the church and lowered the standards of what it meant to be a Christian. Today it is hard to identify what a Christian is. All of this because satan has infiltrated the church and deceived the saints.

Satan’s authority over matters on the earth can only be overcome as Christians pray on behalf of the church and country. God is longing today for someone who will make up the hedge and stand in the gap before Him across the land and around the world.

We are to pray for one another as we walk in the love of God and overcome satanic deception. God is greater than anything that the devil can try to bring on the church. We already have the victory because Jesus Christ obtained it for us!

On September 2, 1950, Jesus Christ appeared to Kenneth E. Hagin. Jesus stated to him, “Many of My own people will not accept the moving of My Spirit, and will turn back and will not be ready to meet Me at My coming. Many will be deceived by false prophets and miracles of satanic origin. But follow the Word of God, the Spirit of God, and Me, and you will not be deceived. I am gathering My own together and am preparing them, for the time is short.”  The words “not be ready to meet me at My coming” should cause us to pause and take notice of our Christian walk. Are we following the Lord Jesus? Do we accept the moving of the Holy Ghost or are we against the moving of the Holy Ghost? (See the book, I Believe In Visions, by Kenneth E. Hagin, chapter two) Jesus Christ specifically stated, “They would not accept the moving of His Spirit and would turn back.” The Holy Ghost is the only agency of the Godhead at work in the earth today. It is through the Holy Ghost that we have communion with our Heavenly Father, by the blood of Jesus Christ. If we reject Him, we are rejecting the Lord Jesus Christ, and our Heavenly Father.

Take your place in faith and stand against this deception in the name of Jesus Christ. Follow the Word of God, the Spirit of God, and Jesus and you won’t be deceived. We are coming into the greatest days the church has ever seen.