While praying about what the Lord Jesus wanted to do in our Word and Spirit meetings in Pennsylvania, the Spirit of God revealed His plan. He told me to speak on our authority over evil spirits, and relate the vision where he appeared to Dad Hagin, in Broken Bow, OK in December 1952. I did and the Glory came upon us! 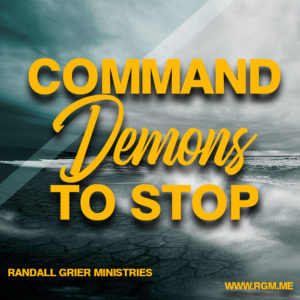 Jesus Christ appeared to Dad Hagin in 1952 and told him things about demon spirits that he did not know. Up until that time, Dad Hagin had always prayed for God to do something about the devil for him. He had been wrong all those years because of a lack of knowledge of God’s Word.

What Jesus Christ Revealed
Jesus said to him, “I am going to teach you concerning the devil, demons, and demon possession. I will show you how these spirits get ahold of people and dominate them – even Christians, if they allow them to.” During this vision, a demon ran between Jesus and Dad Hagin and put out a smoke screen and the demon began to yell. Dad Hagin could not see Jesus or hear what he was saying. He wondered why Jesus didn’t do something about this demon? Finally, in desperation and frustration Dad Hagin said to the demon, “I command you to be quiet in the name of Jesus Christ!” Immediately the demon stopped and fell to the floor. He command him to leave and it ran off.

Jesus Christ Proves It From The Bible
Dad Hagin said, “Lord, even though I am seeing You with my own eyes, even though I hear your voice speaking to me as plainly as any voice I have ever heard, I cannot accept that unless You prove it to me by the Word of God. For the Word says, . . . in the mouth of two or three witnesses shall every word be established (2 Cor. 13:1). I will not accept any vision, I will not accept any revelation, if it cannot be proved by the Bible.”

Dad Hagin said, “Instead of becoming angry with me for saying this, Jesus smiled sweetly and said, “I will give you not just two or three witnesses; I will give you four witnesses.” I said, “I have read through the New Testament 150 times and many portions of it more than that. If that is in there, I don’t know about it.” Jesus said, “Son, there is a lot in there you don’t know. There is not a single place in the New Testament where believers are ever told to pray against the devil and I will do anything about him. Every writer of the New Testament in writing to the Church always told the believer to do something about the devil.”

Four Witnesses From Scripture
Matthew 28:18-20
Jesus said, “You might say, ‘But you could have done something about that evil spirit because this Scripture says you have all power and authority in Heaven and in earth.’ However, I have delegated my authority on the earth to the Church.”

1 Peter 5:8-9
Jesus said, “Peter said, ‘Be sober, be vigilant; because your adversary the devil, as a roaring lion, walketh about, seeking whom he may devour’ (1 Peter 5:8). What are you going to do: Throw up your hands and say, ‘I am whipped’? No, a thousand times no! We read in First Peter 5:9, ‘Whom resist stedfast in the faith. . . .’ You couldn’t resist the devil if you didn’t have authority over him. But you do have authority over him, and that is why you can resist him.”

Ephesians 4:27
Jesus said, “Paul said in his writings to the Church at Ephesus, ‘Neither give place to the devil’ (Eph. 4:27). This means you are not to give the devil any place in you. He cannot take any place unless you give him permission to do so. And you would have to have authority over him or this wouldn’t be true!”

Jesus said, Here are your four witnesses: I am the first, James is the second, Peter is the third, and Paul is the fourth. These are the four witnesses I told you I would give instead of just two or three. This establishes the fact that the believer has authority on earth, for I have delegated my authority over the devil to you on the earth. If you don’t do anything about rebuking the devil, then nothing will be done, and that is why many times nothing is done.”