And it came to pass, when the LORD would take up Elijah into heaven by a whirlwind, that Elijah went with Elisha from Gilgal. And Elijah said unto Elisha, Tarry here, I pray thee; for the LORD hath sent me to Bethel. And Elisha said unto him, As the LORD liveth, and as thy soul liveth, I will not leave thee. So they went down to Bethel. And the sons of the prophets that were at Bethel came forth to Elisha, and said unto him, Knowest thou that the LORD will take away thy master from thy head to day? And he said, Yea, I know it; hold ye your peace. 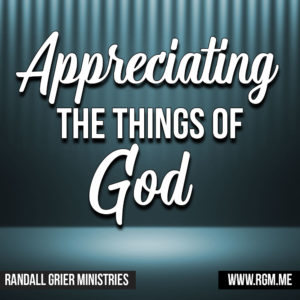 Elijah tried to get Elisha to stay behind three different times. Why? God is not going to give His anointing to those who do not appreciate it. A good pastor friend of mine preached a message one time talking about the reason why God doesn’t move more. He was talking about his church, services, other meetings and services because we don’t appreciate the anointing. In fact, he brought out something in Matthew 7 that I have never seen in this life.

Jesus said not to cast your pearls before the swine or hogs unless they turn again and trample you under their feet. You don’t give a hog precious jewels, diamonds, emeralds, rubies, or anything else like that. Why? Because they don’t even know what they are. They could care less. Could you see a hog out in the hog pin with mud all over it with a $40,000 necklace and a toe ring on it’s hoof? You know what he’s going to do with it? He’s going to flop around in the mud. Why? Because he could care less about it. The priceless jewelry would get lost in the hog feed and he’d swallow it. Why? He doesn’t care. He doesn’t see the value in it. There’s no respect or appreciation.

God will not give his anointing to people who do not appreciate it. It’s precious, it’s holy, and only if you want it and really desire it – truly know it’s benefit – then God will give it to you. If you appreciate God’s anointing, that’s when God is going to give it to you.

But he didn’t. Elisha walked across on dry ground with Elijah. If you’ll keep walking with God and doing His will, I don’t care how it hadn’t been working for you, God will show up and vindicate you every single time. It’s promised in His Word.

Just as Elisha appreciated the anointing of God that Elijah had and showed respect for it, we show our appreciation and respect by seeking God and waiting for His direction.We do it by seeking God’s pattern and then positioning ourself in it.

Elisha put himself in a position to receive the anointing from Elijah when the prophet was taken up. Elijah said that if you see me when I’m taken up, you’ll get it.

“And it came to pass, as they still went on, and talked, that, behold, there appeared a chariot of fire, and horses of fire, and parted them both asunder; and Elijah went up by a whirlwind into heaven. And Elisha saw it, and he cried, My father, my father, the chariot of Israel, and the horsemen thereof. And he saw him no more: and he took hold of his own clothes, and rent them in two pieces. He took up also the mantle of Elijah that fell from him, and went back, and stood by the bank of Jordan; And he took the mantle of Elijah that fell from him, and smote the waters, and said, Where is the LORD God of Elijah? and when he also had smitten the waters, they parted hither and thither: and Elisha went over. And when the sons of the prophets which were to view at Jericho saw him, they said, The spirit of Elijah doth rest on Elisha. And they came to meet him, and bowed themselves to the ground before him.” – 2 Kings 2:11-15

What happened? Elisha put himself in a position to receive the anointing of God from Elijah. If you’ll find out God’s heavenly pattern – God’s heavenly plan for you, your life, your ministry, your church – and position yourself right there, you will be put over. You’ll come out on top, and you’ll experience the glory of God every time.

Elisha esteemed the anointing of God. He esteemed it as precious and valuable and he positioned himself to receive it as well. That’s why it came on his life.

You can also notice something else about Elisha. He wasn’t out following the world. He wasn’t telling the prophet Elijah the way things needed to be. He wasn’t tying to bring the ways of Baal or idols into what Elijah was doing. He understood that if He was to receive the anointing, he had to receive the one who the anointing came from. He couldn’t mix in these other things and still expect to get the fullness of what God had. He sought God, appreciated Him and the anointing, and that’s it. Nothing came between him and God.

God is with you.