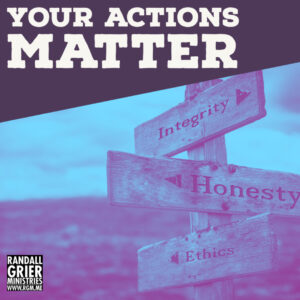 I kindly listened to this minister friend and then kindly responded to him that he better wake up the Apostle Paul because he was unaware of this new revelation. Kindly. The Apostle Paul wrote to the Galatians and told them all sorts of things that they needed to do, not just what they needed to believe. Of course this didn’t go over too well and he got mad. It’s amazing how quickly people get mad who get a “new revelation,” just by bringing the Bible into the conversation.

Another person that wouldn’t agree with this minister would be Dad Hagin. You remember the story don’t you, of Dad Hagin falling off the stage and hurting his arm? That’s when the Lord appeared to him, in the hospital, and talked to him about his ministry. The Lord told him that he was putting his teaching gift ahead of the prophetic gift. The Lord went on to tell Dad Hagin that He had tried to get him to make a change repeatedly and since he hadn’t, the Lord allowed Dad Hagin to have the experience he had for the purpose of arresting his attention.

You may ask, did the Lord do it? No, but He allowed it to happen because Dad Hagin was not in His perfect will. Of course the Lord helped him too. The injury was not as bad as the doctors thought, and healing came faster than they thought as well. During this time, the Lord told Dad Hagin that if He had not intervened in his life, that Dad Hagin would have died by the time he was 55 years old. That means RHEMA Bible Training Center would have never been started because it wasn’t started until he was 57 years old. That also means that everything that has happened through all the ministers, churches, and ministries that have graduated and come forth through there would have never happened. All those connections that were made because of RHEMA Bible Training Center would not have happened.

So not only does Dad Hagin think that what you do matters, so does our Lord Jesus Christ. Don’t believe this false doctrine junk that says you can do anything you want because you are already forgiven. What you do matters!

Don’t be deceived by false prophets, miracles of satanic origin, or false doctrines. You stay with the Word of God, the Lord Jesus Christ, and the Spirit of God and you will not be deceived. God is with us!