About that time, the Holy Spirit came upon me again. It seemed as if a wind were blowing on me, and I fell flat on my face on the platform. As I lay under the power of God, it seemed as if I were standing high on a plain somewhere in space, and I could see for miles and miles around me, just as one can stand on the great plains of the United States and gaze off into the distance for miles.

I looked in every direction, but I couldn’t see a sign of life anywhere. There were no trees or grass, no flowers or vegetation of any kind. There were no birds or animals. I felt so lonely. I was not conscious of my earthly surroundings.

As I looked to the west, I saw what appeared to be a tiny dot on the horizon. It was the only moving thing I could see. As I watched, it grew larger and came toward me, taking on shape and form.

Soon I could see it was a horse. As it came closer I could see a man upon the horse. He was riding toward me at full speed. As he approached, I could see he held the reins of the horse’s bridle in his right hand, and in his left hand, high above his head, he held a scroll of paper.

When the horseman reached me, he pulled on the reins and stopped. I stood on his right. He passed the scroll from his left hand to his right hand and handed it to me.

As I unrolled the scroll, which was a roll of paper 12 or 14 inches long, he said, “Take and read.” At the top of the page in big, bold, black print were the words “WAR AND DESTRUCTION.” I was struck dumb. He laid his right hand on my head and said, “Read, in the Name of Jesus Christ!”

I began to read what was written on the paper, and as the words instructed me, I looked and saw what I had just read about.

I turned to read the scroll again, and then looked and saw what I had just read about. I saw many women — old women with snowy white hair, middle-aged women, young women, and teenagers. Some of the younger ones held babies in their arms. All of the women were bowed together in sorrow and were weeping profusely. Those who did not carry babies held their hands on their stomachs as they bowed over and wept. Tears flowed from their eyes like water.

I looked at the scroll again, and again I looked to see what I had read about. I saw the skyline of a large city. Looking closer, I saw the skyscrapers were burned-out hulls. Portions of the city lay in ruins. It was not written that just one city

would be destroyed, burned, and in ruins, but that there would be many such cities destroyed.

The scroll was written in the first person, and seemed as if Jesus Himself were speaking. I read, “America is receiving her last call. Some nations already have received their last call and never will receive another.”

Then in larger print it said, “THE TIME OF THE END OF ALL THINGS IS AT HAND.” This statement was repeated four or five times. Jesus also said this was the last great revival.

He went on to say, “All the gifts of the Spirit will be in operation in the Church in these last days, and the Church will do greater things than even the Early Church did. It will have greater power, signs, and wonders than were recorded in the Acts of the Apostles.” He said that we have seen and experienced many healings, but we will now behold amazing miracles that have not been seen before.

Jesus continued, “More and more miracles will be performed in the last days which are just ahead, for it is time for the gift of the working of miracles to be more in prominence. We now have entered into the era of the miraculous.

“Many of My own people will not accept the moving of My Spirit, and will turn back and will not be ready to meet Me at my coming. Many will be deceived by false prophets and miracles of satanic origin. But follow the Word of God, the Spirit of God, and Me, and you will not be deceived. I am gathering My own together and am preparing them, for the time is short.”

There were several other exhortations to watchfulness, to awaken and pray, and not to be deceived. Then I read, “As it was in the days of Noah, so also shall the coming of the Son of Man be. As I spoke to Noah and said, ‘For yet seven days, and I will cause it to rain upon the earth forty days and forty nights; and every living substance that I have made will I destroy from off the face of the earth [Gen. 7:4], so today I am speaking and giving America her last warning and call to repentance, and the time that is left is comparable to the last seven days of Noah’s time.”

“Warn this generation, as did Noah his generation, for judgment is about to fall. And these sayings shall be fulfilled shortly, for I am coming soon.” Jesus repeated, “This is the last revival. I am preparing My people for My coming. Judgment is coming, but I will call My people away, even unto Myself, before the worst shall come. But be thou faithful; watch and pray, for the time of the end of all things is at hand.”

At the time I had this vision, naturally I interpreted the scenes to mean that America would experience the devastation of war. However, when I saw television and newspaper photographs of destruction wrought by student rebellion and race riots in the 1960s, I realized that these scenes partially fulfilled this vision. (This is why it is so important not to place your own interpretation on things God shows you.)

Those who were present that night under the tent said I read the scroll aloud for about 30 minutes. I cannot remember all of it. I handed the scroll back to the rider, and he rode away in the direction from which he had come.

Then I was conscious of the fact that I still lay flat on my face on the floor, and for a few minutes I remained there, feeling the glory of this miraculous visitation. 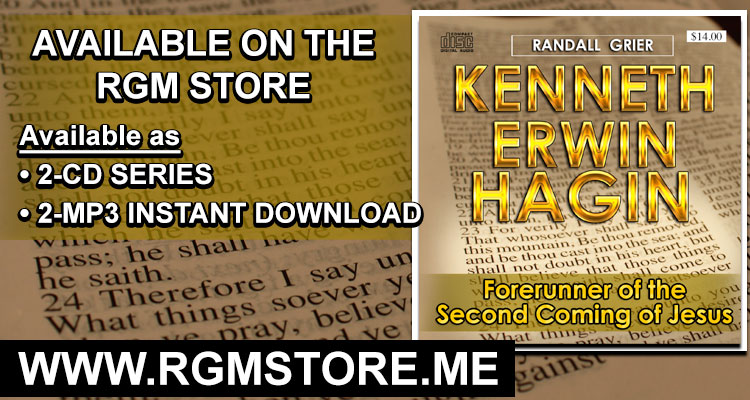 Click Here To View It At The RGM Store