And ye have forgotten the exhortation which speaketh unto you as unto children, My son, despise not thou the chastening of the Lord, nor faint when thou art rebuked of him: For whom the Lord loveth he chasteneth, and scourgeth every son whom he receiveth.  – Heb 12:5-6 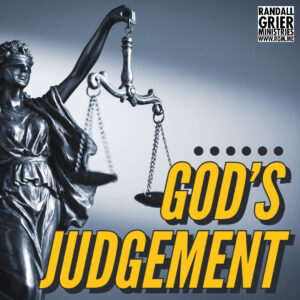 I remember, running through the woods, trying to get away from the police officers, helicopters and bloodhounds that were trying to find me. I had just committed an armed robbery (this was in the early 1970’s, before I accepted Christ). I fell on the ground, exhausted, because I had been running so hard. What seemed to make sense (robbery) a few hours earlier now seemed stupid, dumb and ignorant! Why? I realized that I would be judged for this crime if I was caught. Judgment came when I was apprehended a few months later and I was sent off to prison by the judge of the court. I didn’t judge myself and not commit the robbery so the judicial system judged me. They didn’t want me to rob and steal so I was punished by being sent to prison, to hopefully correct me and make me not want to rob and steal anymore. Prison was painful! It made me want to do right.

I think back to when I was a child and I would do something that my parents told me not to do. When they found out what I had done they would judge me and punish me to correct me. There is something about applying the board of correction to the seat of learning that makes us act differently! It was painful! It made me want to do right.

Jesus paid the penalty for all sin, sickness and poverty. He became a curse for us and redeemed us from the curse of the law found in Deuteronomy chapter 28. It is for this reason that we live in an age of God’s Grace. Some have thought that God will not judge us and chasten us because of this fact, but that is not what the Bible says. The only sin that Jesus paid for is sin that is confessed and asked forgiveness for. If you are living in sin and wrong doing, Jesus will judge that sin if you are a Christian.

I have listed instances of judgment from the New Testament. All of these took place during the age of Grace: during the church dispensation, after the resurrection of Jesus Christ. All these took place after the blood of Jesus had been shed and the penalty of sin had been paid for. If people persist in wrong doing, that are born-again, the Lord will turn them over to Satan for the destruction of the flesh that their spirit may be saved in the day of the Lord Jesus. Lets look at these judgments:

But Peter said, Ananias, -why hath Satan filled thine heart to lie to the Holy Ghost, and to keep back part of the price of the land? (Acts 5:3) And Ananias hearing these words fell down, and gave up the ghost: and great fear came on all them that heard these things. (Acts 5:5)

Then Peter said unto her, How is it that ye have agreed together to tempt the Spirit of the Lord? behold, the feet of them -which have buried thy husband are at the door, and shall carry thee out. Then fell she down straightway at his feet, and yielded up the ghost: and the young men came in, and found her dead, and, carrying her forth, buried her by her husband. And great fear came upon all the church, and upon as many as heard these things. (Acts 5:9-11)

Judgment for greed, the lust for things and keeping money that belongs to the Lord is upon us! The love of money is the root of all evil. Some Christians have fell into the money trap and put the Lord on the back burner to go after money. It has been said God don’t need our money. Yes He does. He doesn’t rain money down from heaven. He causes money to come to us so we can build His kingdom. Some have kept money for themselves that belong to churches and ministries for the building of God’s Kingdom. Make sure your motives are right about money and make sure you sow seed where He told you to. Do it today!

And immediately the angel of the Lord smote him, because he gave not God the glory: and he was eaten of worms, and gave up the ghost. (Acts 12:23)

Jesus told Dad Hagin in a vision to be careful to give Him all the Glory for what happened in his ministry. Judgment is coming on those who have glorified themselves. Some ministers and Christians have come from a lowly place and have found themselves in a large place. They begin to flaunt themselves and think they are better than everyone else. They said, “I don’t need anyone else, I am the man now!” They forgot that God raised them from the dung hill. They have taken the Glory away from God. Repent!

It is reported commonly that there is fornication among you, and such fornication as is not so much as named among the Gentiles, that one should have his father’s wife. (1 Cor 5:1) To deliver such an one unto Satan for the destruction of the flesh, that the spirit may be saved in the day of the Lord Jesus. II Cor 5:5

SPEAKING AGAINST GOD – HINDERING HIS PLAN:

Of whom is Hymenaeus and Alexander: whom I have delivered unto Satan, that they may learn not to blaspheme. (1 Tim 1:20) And he fell to the earth, and heard a voice saying unto him, Saul, Saul, why persecutes! thou me? (Acts 9:4)

Judgment is happening for those who are trying to stop the plan of the Lord. Some say the Holy Spirit is not welcome in the church for fear of offending people. You had better fear God and forget the people. God will deal with the people if they reject Him. Don’t speak against speaking in tongues, gifts of the Spirit, divine healing or signs and wonders of God. Let not anyone speak against the work of God or His ministers. It is time to ask for forgiveness!