And be not conformed to this world: but be ye transformed by the renewing of your mind, that ye may prove what is that good, and acceptable, and perfect, will of God. – Romans 12:2 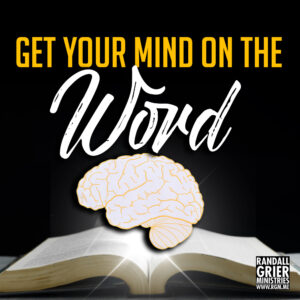 You can’t change the culture of the world around you if you are all goofed up and don’t know what the culture needs to be like. One of the greatest needs in the body of Christ is renewing the mind with the Word of God. What you think determines where you are going to go.

What you think determines what you believe, which determines how you act, which will determine where you go. The anointing is important and we need to get the anointing. However, until your mind and thinking get straightened out, it doesn’t matter how anointed you are, you’re going to crash eventually. You can go back through history and see great men of faith who were anointed by God; they had the miracle power of God working through them, but their thinking was messed up and they died prematurely. The devil took them out.

And the Lord said, Simon, Simon, behold, Satan hath desired to have you, that he may sift you as wheat: But I have prayed for thee, that thy faith fail not: and when thou art converted, strengthen thy brethren. – Luke 22:31-32

The devil’s plans have not changed. He is still after believers. He is still after preachers, trying to sift them. He’s still trying to bring them down and take them out. One way he does that is through what we think. That’s what he did to Eve. He tries to get our focus off the Word of God, off of what God has said, and onto anything else. He tries to get us consumed with entertainment and anything else the world has to offer.

But I fear, lest by any means, as the serpent beguiled Eve through his subtilty, so your minds should be corrupted from the simplicity that is in Christ. – 2 Corinthians 11:3

The Christian should be spiritual first and foremost. You can be born again and not be spiritual and unfortunately, that’s an epidemic in the body of Christ. Too many in the church are more earthly minded than heavenly minded, and it shows. We need to get back to the Word of God. We need to get back to judging everything that comes our way by the Word. If it doesn’t agree with the Word – get rid of it. Get it out of your life. Get it out of your church.