Judgment is a Biblical subject that we have avoided, in the church, because it is controversial to many. Also, none of us want to be judged so we do not like to think or talk about it. Most like to hear how much the Lord loves us, and He does. We like to to hear about the mercy and grace of God. We do not like to hear about judgment but it is a Biblical truth, proven by the scriptures, in the New Testament. 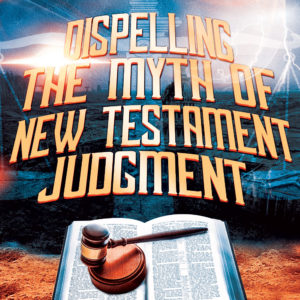 Our Heavenly Father is not a crazed tyrant waiting for a chance to cause havoc, turmoil, test and trials, problems or premature death in our lives. God is love. Those things can happen to us, but it is not the fault of our Heavenly Father or the Lord Jesus Christ.

Another major truth to consider is just because we encounter problems does not mean we have done something to deserve it or judgment is taking place. The devil attacks those who are in the perfect will of God to cause problems for them. These things make us depend upon the Lord and be strong in Him and the power of His might. No one can live the Christian life without the Holy Ghost putting them over.

There is a myth or false tale going around that states all judgment ceased at the cross. Yes, that is a myth because it does not agree with the Bible. Jesus pronounced judgment, in His day, that would be accomplished after His shed blood, death, burial, resurrection and ascension to His Throne. This occurred, in the New Testament, after the penalty for all sin had been paid.

And thou, Capernaum, which art exalted unto heaven, shalt be brought down to hell:for if the mighty works, which have been done in thee, had been done in Sodom, it would have remained until this day. But I say unto you, That it shall be more tolerable for the land of Sodom in the day of judgment, than for thee. (Matthew 11:23-24)

And Jesus went out, and departed from the temple:and his disciples came to him for to shew him the buildings of the temple. And Jesus said unto them, See ye not all these things? verily I say unto you, There shall not be left here one stone upon another, that shall not be thrown down. (Matthew 24:1-2)

These judgments happened after Jesus was resurrected from the dead. It was in the New Testament era.

But Jesus turning unto them said, Daughters of Jerusalem, weep not for me, but weep for yourselves, and for your children. For, behold, the days are coming, in the which they shall say, Blessed are the barren, and the wombs that never bare, and the paps which never gave suck. (Luke 23:28-29)

The people were weeping for Him as He was taken to be crucified. He told them to weep for themselves pointing to a judgment that would come on the Jewish people for their rejection and treatment of Him. Oh God! It did come upon them as millions of Jews (men, women, babies and children) have been tortured, starved, beat, kicked and cussed, baked in ovens, and eventually killed since that day. You do recall the Romans and Hitler. Of course, they weren’t the only ones.

The penalty of sin had been paid for, why did judgment come? They failed to repent. Oh God! Forgive them and us! Do you think that America will not be judged if it rejects Him? Yes it will, is your answer. He is a righteous and just God and is not a respecter of persons or nations. Rejection of Jesus Christ will bring judgment to any nation just like it did to the Jews. Forgive us oh Lord!
Some say all the Jews will eventually be saved. That is a lie of the devil. They must accept Jesus Christ just like any other people group or go to hell. (Matt. 8:11-12)

To say that judgment does not take place in the church age or New Testament era is simply ignorance of the Bible and history.

O Jerusalem, Jerusalem, which killest the prophets, and stonest them that are sent unto thee; how often would I have gathered thy children together, as a hen doth gather her brood under her wings, and ye would not! Behold, your house is left unto you desolate:and verily I say unto you, Ye shall not see me, until the time come when ye shall say, Blessed is he that cometh in the name of the Lord. (Luke 13:34-35)

Jesus Christ did not tell them they were automatically forgiven for rejecting him. He declared, “Your house is left unto you desolate.” This was speaking of Israel no longer having a nation or country to call their own. Did it happen, in the New Testament church age? Yes it did, is your answer. The Jews were scattered throughout other nations, in fear of their lives.

Draw nigh to God, and he will draw nigh to you. Cleanse your hands, ye sinners; and purify your hearts, ye double minded. (James 4:8)

I myself have suffered the penalty of sin. I spent over ten years in prison for disobeying God and the laws of the land. I wasn’t automatically forgiven. I told the court and God I was sorry but I was judged and sentenced to prison for punishment. You could say, I begged for mercy but they still sent me to prison and did not hear my plea.

I have been speaking of breaking laws in the natural world. There are spiritual laws that people and Christians can violate. In fact, there are more spiritual laws broken, in the world, than natural laws.

Then fell she down straightway at his feet, and yielded up the ghost:and the young men came in, and found her dead, and, carrying her forth, buried her by her husband. (See Acts 5:1-11)

And immediately the angel of the Lord smote him, because he gave not God the glory:and he was eaten of worms, and gave up the ghost. (See Acts chapter 12)

Take notice this happened after Jesus Christ had paid the penalty for all sin. They were not automatically forgiven. They were struck down and their lives ended in death. Forgive us!

And now, behold, the hand of the Lord is upon thee, and thou shalt be blind, not seeing the sun for a season. And immediately there fell on him a mist and a darkness; and he went about seeking some to lead him by the hand. (See Acts 13:8-12)

The Apostle Paul pronounced judgment upon this man and it occurred immediately. Jesus Christ did not stop it. The Apostle Paul was anointed by the Spirit of God to do this.

While in prison as a born again Christian (see my book Escape From Hell) I had an experience similar to the Apostle Paul. I pastored the convict church and the Spirit of God moved mightily among us.

One day, several homosexuals burst into our church service. They began to yell at me and curse me and the church in their anger. They said God made all homosexuals and they were right with God. They wanted the right to speak to my church and I told them no! They were furious and I knew they were going to try to kill me right then. Fear gripped me but suddenly the Spirit of God came upon me mightily. I said, “I command you to shut up and get out of this church and I turn you over to Satan for the destruction of the flesh in the name of Jesus Christ!” They left immediately and slammed the door.

I was anointed by the Holy Ghost to do that. I was also astonished that I said what I did because it came from my spirit, not my mind. It is in the Bible also.

To deliver such an one unto Satan for the destruction of the flesh, that the spirit may be saved in the day of the Lord Jesus. (2 Cor. 5:1-5)

The Apostle Paul pronounced judgment on this man in these scriptures. He was anointed by the Lord Jesus to do so.

The leader of the homosexual group returned to our prison church service a few days later. Church had already started when he walked in. You could tell he had been bleeding profusely in his abdomen and he was bandaged up. He stopped in the back and lifted his hand to request permission to speak. I asked him what he wanted? He said, “My guts are falling out of my body because my skin busted open at my stomach! I want to repent for cursing you and the church. Please forgive me!”

With those words, a prison guard took him by the arm and led him away. We never saw him or heard from him again. It spread through the prison and we didn’t have anymore trouble like that. This was in the New Testament era after Jesus Christ had paid the penalty for all sin. He wasn’t automatically forgiven and you and I won’t be either. Lord forgive us.

For the time is come that judgment must begin at the house of God:and if it first begin at us, what shall the end be of them that obey not the gospel of God? And if the righteous scarcely be saved, where shall the ungodly and the sinner appear? (1 Peter 4:17-18)

Our Heavenly Father must judge the church, if sin is there, before He can judge the world. He is just, fair and righteous and reprieves no person or people group above another when they violate His law. When a Christian continues to live in sin, God will allow them to reap what they have sown. Hopefully they repent and turn around.

“The time has come that judgment must begin at the house of God. And there will be those who will fall dead in church, just like Ananias and Sapphira fell dead. And, of course, they’ll have to say, because there’ll have to be a record, that their heart stopped (of course, they wouldn’t die if their heart didn’t stop), and they had a heart attack, but you will remember that it was said. Because, you see, that won’t happen just occasionally. There will be quite a flurry of it, so much to attract people’s attention.

And there will be ministers fall dead in their pulpit. And of course, folks will say, “They had a heart attack.” But you’ll remember that it was said. For those who do not walk on with me, saith the Lord of hosts, and have known my power, and have turned their back on my power, and have spoken even despitefully concerning the power of God and the Spirit of God, open themselves and open the door unto the enemy.