For there are certain men crept in unawares, who were before of old ordained to this condemnation, ungodly men, turning the grace of our God into lasciviousness, and denying the only Lord God, and our Lord Jesus Christ. – Jude 1:4

Jesus said the most damning action of the church today is turning the grace of our God into lasciviousness and what is called casual Christianity. That is because it portrays to people that reverence and respect for God is old fashioned, old school, and have no place in the “modern church.” 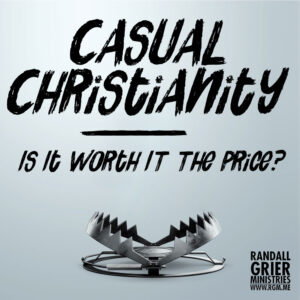 If causal Christianity was the solution from God, for the church to grow and prosper, we would not be in the mess we are in. If this irreverent, lascivious grace and casual Christianity was of God, and it was the answer to grow the church, why are most Christians backslid like the Lord said? Why is the political, economic, social and spiritual realms in chaos? Why has more violence, murders and crime happened since it was implemented? Why has same sex marriage laws passed in our nation since it started? Why are public buildings and schools being required to have transgender bathrooms since it was adopted?   Why is the Bible and prayer removed? Need I list more? The truth is, casual Christianity methods are from the devil. Anyone who is presenting and practicing it is actually following evil spirits whether they realize it or not. Many well meaning ministers and Christians have been deceived by this demonic spirit.

All this time, the casual church claims it is rich and increased with goods. Knowing not that it is wretched, miserable, poor, blind and naked. Just open your eyes and look around at the mess the church and world is in before you brag of your new way to worship God. You’re backslid. You have no authority, no power, you’re not pleasing to God, and you’re not going to make it.

If there is no repentance, you will be judged by the Lord Jesus Christ and turned over to the devil. Jesus told Peter that “Satan has desired to have you and sift you as wheat, but I have prayed for you that your faith fail not.” Jesus Christ cannot violate His Word and allow you to continue to disobey Him and live in sin. He will have to allow the devil to have you because you chose the devil over Him. I know the lascivious grace church doesn’t believe it, but it’s true nonetheless.

So then because thou art lukewarm, and neither cold nor hot, I will spue thee out of my mouth. Because thou sayest, I am rich, and increased with goods, and have need of nothing; and knowest not that thou art wretched, and miserable, and poor, and blind, and naked. (Rev. 3:16-17)

The Lord said to me, “Many in the church today have the same habits and ways of the Laodicean church. They are walking in the flesh, backslid and do not follow the Holy Ghost. I will deal with them just as I did the Laodiceans.”

As many as I love, I rebuke and chasten: be zealous therefore, and repent. Behold, I stand at the door, and knock: if any man hear my voice, and open the door, I will come in to him, and will sup with him, and he with me. To him that overcometh will I grant to sit with me in my throne, even as I also overcame, and am set down with my Father in his throne. He that hath an ear, let him hear what the Spirit saith unto the churches. (Rev. 3:19-22 )